Connect with us
Flemington (9 Races)

A stellar field is assembled for this year’s Cox Plate, with a host of internationals tackling the best weight-for-age stock Australia has to offer. Tim Geers has assessed the chances of every runner in Saturday’s $5 million Group 1. 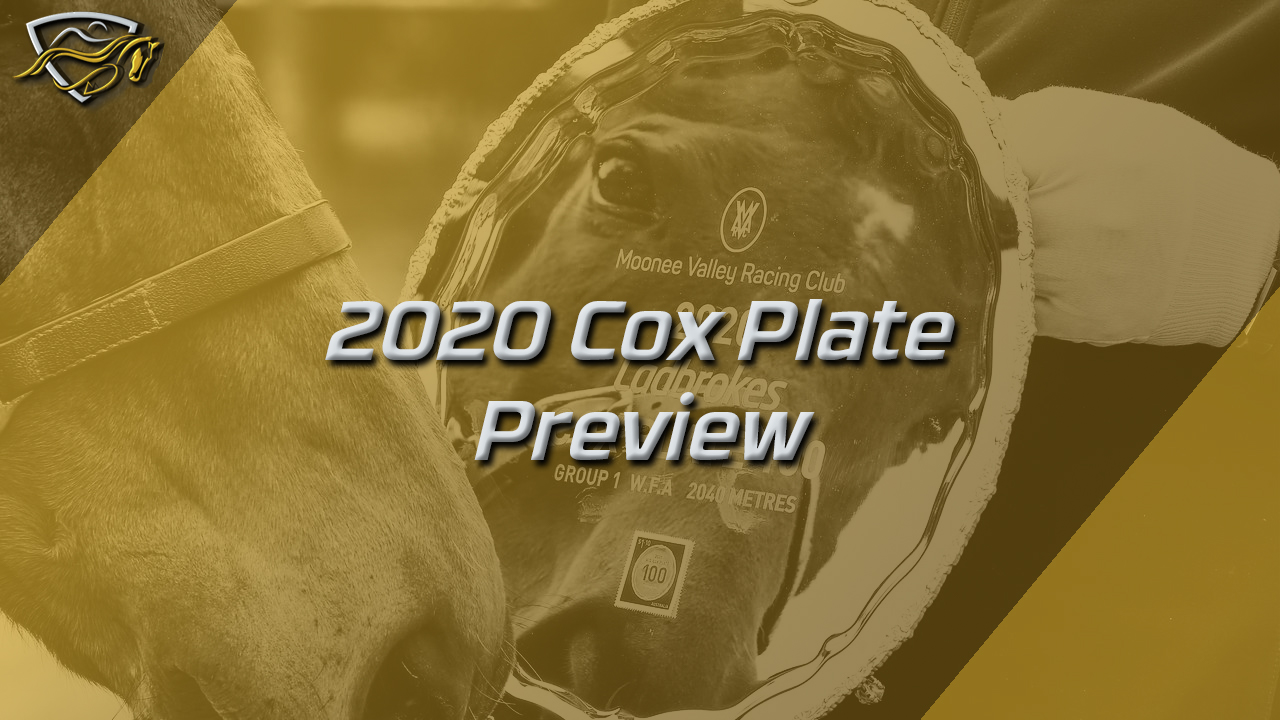 A stellar field is assembled for this year’s Cox Plate, with a host of internationals tackling the best weight-for-age stock Australia has to offer.

Difficult to predict the speed map but I’m fairly certain we’ll see the three-year-old (14) Grandslam kick up and lead from barrier 5 with his light weight. I’m of the opinion we’ll see (11) Russian Camelot go forward from his wide gate to take up a position outside the leader. (1) Kolding has been ridden positively in recent starts so expect him to roll forward from 10, along with (15) Buckhurst who is drawn to his outside. (13) Probabeel should be on speed from barrier 2, with (4) Master Of Wine three pairs back on the fence from the rail draw. International duo (6) Aspetar and (12) Armory are likely to be midfield from barriers 3 and 6 respectively. (5) Mugatoo can slot in worse than midfield along with (9) Arcadia Queen, who was ridden cold last start and that will likely be the tactic again today. (7) Sir Dragonet was ridden quietly at the back of the field in his most recent start in Europe – hard to know what will happen with the new stable but I’ve got him in the back section of the field, joined by (2) Humidor who draws wide, and regular backmarker (10) Nettoyer. The other interesting runner on the map is (3) Fierce Impact, who went back last start in Sydney but I’d expect them to try and be much further forward today, although they risk being caught wide from 12.

He’s a hard horse to assess because he’s absolutely flying in recent starts and is back to his best form, however that form hasn’t been replicated in the past when he’s come to Melbourne. From all reports, he flew around The Valley at trackwork during the week, but you’d have to trust him to be able to produce it on raceday the Melbourne way of going. He has a tricky map from barrier 10 but I actually think he’s a chance of slotting in one-out, one-back if Russian Camelot progresses forward. If not, he might well be able to slot in outside the leader. Have to take him on but he scares me.

Back to somewhere near his best form under Chris Waller and he does love The Valley. The barrier draw really makes it tough for him though and it’s hard to see him turning the tables on Arcadia Queen and Russian Camelot, whether it be wet or dry.

I think he’s way over the odds here. First up he was beaten 0.3L by Verry Elleegant; he then beat Russian Camelot, albeit the Russian sat wide throughout, and last start he was given a negative ride that gave him no mathematical hope of winning. The barrier really hurts but I think well see him ridden closer to the speed today and it’s hard to begrudge his form. He shouldn’t be $34, especially considering the prices of some horses that are shorter than him.

Has disappointed massively this preparation and comes off another poor run in last weekend’s Caulfield Cup. Draws barrier 1 here so is likely to just plant himself three pairs back on the rail. Hard to see him finishing in the money though.

He’s one horse that I think is rated incorrectly when you consider Fierce Impact is $34 and he’s $21. He had absolutely every hope in the world in The Metropolitan last start and couldn’t get it done, with Mirage Dancer edging him out. Mirage Dancer would be millions in this race. He’s got a great record and always runs well but I don’t see him being at this level.

Probably hopes the rain stays away as his record on Good ground is very impressive. He comes into this first up off a 13-week spell, having won his last start in the G2 York Stakes. He showed a nice turn of foot on that occasion but the horse he beat has since gone on to be beaten in a G3. So I’m not sure that form is particularly elite. Still, he draws well and has a good record at this sort of distance so he’s a rough chance.

International import now under the care of Ciaron Maher and David Eustace in Australia. He’s run 2nd in his past four starts. He’s another one that’s hard to assess because last time we saw him he ran 2nd to Magical which is an exceptional form line, however prior to that he was beaten by Buckhurst, who was outclassed in last weekend’s Caulfield Cup. His speed map is a bit awkward given he tends to race a fair way off the pace. I have to take him on but I do respect the form behind Magical.

The Queen was back to her brilliant best last start in the Caulfield Stakes, turning the tables on Russian Camelot. There were a few keys, those being the firmer ground, the big gear change of the bar plates coming off, along with the quieter ride. It could depend how much rain falls on the day. We saw no rain hit The Valley on Friday night but it’s hard to know what will come on Saturday. If it’s a firm track, look out. She could start close to favourite and will take a power of beating. Even on softer ground, I think she’s a real chance – I don’t necessarily subscribe to her not liking the wet, I just think there’s been a couple of factors contributing to her defeats on those surfaces. Out to a very backable price now at $6.50. Showed a return to form with a strong finish in the G3 Craven Plate at Randwick last weekend. She’s going to be dead last in the run though and this is an incredibly strong race so she appears outclassed.

What do they do from barrier 15? Ride him aggressively to sit outside the leader like he did in his Underwood Stakes victory? Or go back and hope to loop the field with the knowledge he can sustain a long run? They will probably be praying the rain comes in droves as that’s when he’s really been at his brilliant best. That’s not to say a firm track will bring him undone though. I wouldn’t be surprised if they made this a real staying test from the 800m mark, knowing they’ve got a horse capable of running it out strongly. Would be fascinating viewing if Ollie were to take off a long way from home. If the rain comes, I think he’s the horse to beat, but if it remains firm, he might struggle to beat Arcadia Queen.

Allegedly presented with lameness a couple of days ago but the stable were adamant he was 100% and he takes his place. He showed a very good turn of foot to win at the Curragh two starts ago, where he burst out of the pack having been held up badly in the straight. He then ran 3rd to Magical and Ghaiyyath which is serious form. Drawn ideally in barrier 6 so he should be able to sit midfield and the stable have said he comes into this in better form than what Adelaide did when he won it a few years ago. Have to respect.

She’s returned in magnificent order this preparation, with an eye-catching first up run followed by victories in the Bill Ritchie and the Epsom Handicap. She’ll be well suited so long as the ground isn’t heavy, and her barrier draw should see her position right up on the speed behind the leaders. Hard to knock the way she’s going but she does still have to tick the box of 2000m. Her only prior start at the distance was a 2nd to Shout The Bar, who would be millions in this race.

Adds another dimension to the field. The obvious comparisons are there with the likes of Shamus Award who profiled similarly before he won the Cox Plate but I’m not convinced this horse is as good as Shamus Award was. He was beaten in a BM64 two starts ago and although he ran 3rd in the Guineas last start, he led them up and was out on his feet late. He’ll lead and take some catching with 49.5kg, but I’m not convinced that makes him a genuine winning chance.

Gains a run after all the controversy during the week. He beat Sir Dragonet back in Ireland but he was outclassed in last weekend’s Caulfield Cup, finishing 7th. The blinkers come off for the first time and he drops back to 2000m which is his best distance, so that’s a positive, but he’s got an awkward draw and he would need to improve significantly if he were to be a winning chance here.

If the track is firm, I’m tipping (9) Arcadia Queen to back up her sublime victory in the Caulfield Stakes. If the rain arrives and we’re playing on a soft track, I think (11) Russian Camelot is the horse to beat. In any case, I’ll be backing them both. (12) Armory looks the best of the internationals and deserves respect, while (1) Kolding can’t be dismissed in his current form. (3) Fierce Impact is the blowout chance at $31 and I’ll be having something small on him.