Tim Geers and Trent Crebbin review the weekend’s racing at Doomben, Morphettville and Sydney and provide their horses to follow and sack below. 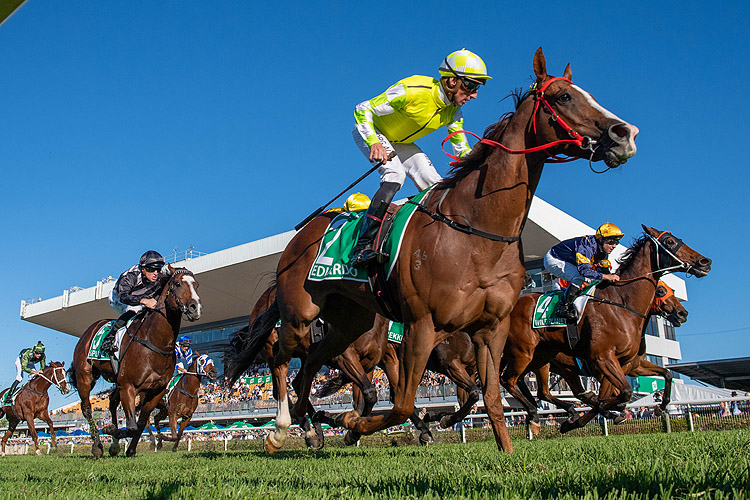 It was another terrific weekend of Group 1 racing in Australia, with Brisbane and Adelaide both hosting top-level feature races. The South Australian carnival came to an end with former-Darwin galloper Savatoxl claiming The Goodwood at Morphettville, while the Brisbane winter carnival kicked off with Eduardo justifying his short quote to win the Doomben 10,000.

Sydney also hosted feature racing of their own, with the second day of the Scone carnival being held  at Rosehill.

Tim Geers and Trent Crebbin review all three meetings and provide their horses to follow and sack below!

Prince Of Boom – I was with him on the weekend and he backed up his dominant debut win with another impressive performance in the Spirit Of Boom Classic. Admittedly, he did have the gun run from barrier 1, but he still put a space on his rivals. Invinsible Tears was an eye-catcher from back in the field. Once she copped a tap around the backside she really picked up strongly to finish 2nd. She looks as if she will relish more ground.

Kukeracha/Senor Toba – Another one I was with on the weekend and he raced well as expected (and was well backed) but just found one better. He had to dart back to the inside which wasn’t ideal but his effort was still very good. He will relish stepping up to 2400m and will be hard to beat when he does.

On face value Senor Toba may have appeared a bit disappointing given he was favourite, but he was a big sluggish out and settled last in the run. He hit the line well to run 3rd and I thought his run had plenty of merit. He’s another that will continue to get better as the race gets longer.

Wild Planet – I had him on top in the 10,000 and he got out to $55 on the exchange pre-race. His run was enormous in defeat. He looked to be going backwards at the top of the straight but he really picked up late, surging into 2nd. His best distance is 1400m and he should take plenty of improvement from that run given he was only first up, so he should be a major player in the Stradbroke.

Axe/Superium – Axe justified favouritism and proved far too good for his rivals, though he did have the race run to suit. He’s now won four of his six starts this prep, with one failure coming on heavy ground and the other when he ran into Skins (how good could he be?!).

Superium had to come from well back in the field and he was probably the run of the race, passing every horse in the straight bar the first two across the line. The Hawkes team have him going nicely and if he draws a gate in a similar race next start, he’ll be very hard to beat.

Cuba – Had everything to suit on the weekend – third up, designated leader, soft ground – but he was absolutely terrible. I could make excuses for his first two runs but he’s now impossible to back this prep off that effort.

High Supremacy – Arguably ended up in inferior ground on the inside, but he still didn’t offer a great deal. The feedback post-race is that he’s probably a miler rather than a 2000m horse.

Khoekhoe – He actually wasn’t all that bad through the line after he appeared to be going backwards at the 800m, but I’d struggle to back him with any confidence going forward.

Athiri – The only excuse I could offer for her disappointing showing on the weekend is the soft ground (she’s yet to win on rain-affected ground) but she was very ordinary. That backs up a first up run that appeared luckless but the jury is now well and truly out.

Wild Vixen – Very strong return from this mare, sitting on speed and looking a good hope early in the straight, but Brooklyn Hustle got the dream run through and her last 400m was too strong. Wild Vixen stuck on well for 2nd and if she finds a similar group 3 sort of race next start, possibly at 1300/1400m she can be very competitive again.

In Good Health – We finally got a collect out of this mare and she was absolutely dominant, leading all the way. She went at a strong gallop but never looked like slowing down, which is the way to ride her. She was a gap between runs last start and didn’t lead, but with blinkers on, up in trip and a jockey change she put it all together. Not sure where they go but she’s going to win plenty more races with her pattern and toughness.

Hasta La War – In hindsight this wasn’t the right race for him, up in class and poorly suited at the weights whilst staying at 1600m. I still think he ran very well, covering heaps of ground when back and wide. Get him up to 2000m and he’s going to be very hard to beat next start.

Laundy – He just keeps going around in the market and struggles to win. Was strongly backed in the opener and had every favour in the 1-1 but found little. He’s a bm70 horse at best and showed that the Melbourne benchmark form isn’t necessarily better than the Adelaide form.

Dollar For Dollar – Might be the last we’ve seen of him but he’s just not the same horse. Was awful 2nd up in Melbourne and has dropped right out again here. Been a solid performer for many years but he looks well and truly past it.

Surreal Step – Improved nicely from his first up run to his second up run, only going down a nose to eventual winner Albumin. Has a good third up record and also won fourth up last prep, so I’d be confident he goes very close in his next two starts. Probably prefers a wet track.

Zing – Made an encouraging return to racing on the weekend, coming from well back in the field to run 3rd. That was the first time she’s placed first up before, but her second up and third up records are very good, so she should be hard to beat at her next couple of starts.

Exoboom – No luck in the Inglis 3YO Guineas, caught wide without cover throughout before battling on strongly for 3rd. He actually holds a nomination for the Stradbroke so no surprise to see him go up to Queensland now.

No Compromise/Lackeen – I was very keen on Lackeen on the weekend at each way odds and he just found one too good in the form of Achiever. He relished the step up in distance and travelled into the race beautifully. He gives me the impression he’ll be even better over further. Can win a similar race next start and if he finds a 2400m race, could be a moral.

No Compromise was having her first start in Australia for Chris Waller, having formerly raced in New Zealand. She drew barrier 11, settled last and finished off very strongly to run 3rd. She will only improve and is definitely a horse to follow.

Salina Dreaming – Was dominant first up but has been disappointing in two subsequent starts. She wasn’t disgraced on the weekend but I wouldn’t be rushing to back her, especially if she keeps starting single figures.

Eleven Eleven – Travelled into the race powerfully and looked a serious danger at the 200m but stopped as if he was shot. Had a beautiful run throughout and seemingly no excuses.

Prime Star – The jury is certainly out with the three-year-old, who started a dominant favourite in the Inglis 3YO Guineas and was awfully disappointing. The three-year-old form continues to be suspect.