The final Group 1 of the Perth Masters Carnival is the Kingston Town Classic and Tim Geers has assessed every runner below. 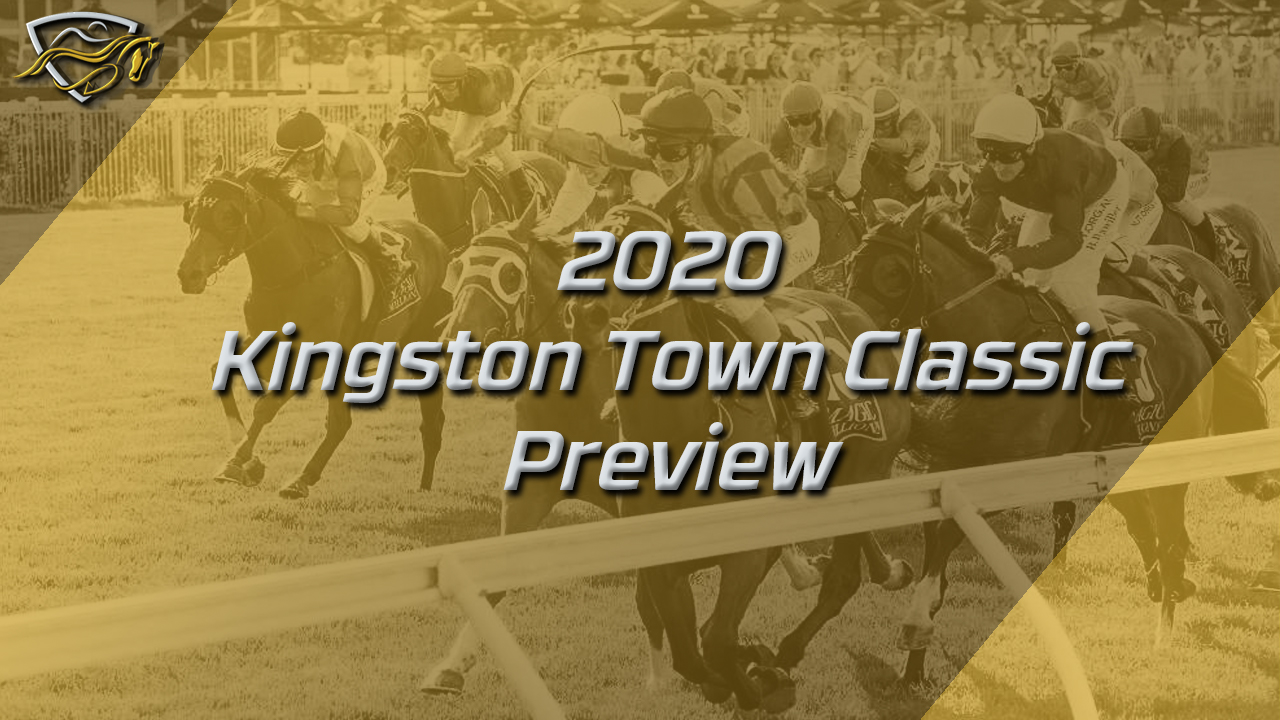 The final Group 1 of the Perth Masters Carnival is the Kingston Town Classic at Ascot on Saturday, with a capacity field set to line up over 1800m for the $1million prize.

The race is run under weight-for-age conditions, with a small crop of three-year-olds once again adding an extra dimension to the contest.

We should once again see this run at a decent clip, with (1) Gailo Chop and (2) Trap For Fools set to take up the running. (4) Too Close The Sun should roll forward to sit right on their heels, while the three three-year-olds – (14) Gemma’s Son, (15) Dom To Shoot and (16) Watch Me Dance all draw well and can roll forward. The interesting runner on the map is (12) Inspirational Girl who starts from the second-widest barrier, meaning they will likely have to go a fair way back in search of cover. This is how I see the runners settling.

Ran 2nd in this race last year and this is much more suitable at weight-for-age over 1800m than the handicap of the Railway over the mile. He had genuine excuses last start, he had a torrid run throughout, but he was also beaten the length of the straight. He did come off a similar run last year, albeit he wasn’t beaten 22L, and he should be able to find the lead with ease from barrier 4. He can improve sharply but hard to be confident that he will.

Has been well beaten in there runs in Melbourne this preparation but has come back to Perth and trialled twice. Drawn wide so will come across to sit outside Gailo Chop but he isn’t going well enough.

After a huge first up win in the Northerly Stakes, he’s struggled to rediscover his best form. He was plain in the Lee-Steere two starts back and didn’t run on in the Railway last start. Drawn the carpark which doesn’t help either.

4. Too Close The Sun

Just continues to show up and race well. He ran enormous first up when beaten by Inspirational Girl, then stepped up to this distance and bolted in, albeit the track conditions were heavily in his favour that day. Then he dropped back to the mile for the Railway last start and bumped into Inspirational Girl again. He hit the front very early in that race and she had the drop on him, but he might have to hit the front early again here if the two in front of him drop out at the turn. Back up to 1800m suits but he meets Inspirational Girl worse at the weights for a 1.8L defeat, so it’s hard to see him turning the tables unless she gets badly strung up in traffic. He’ll run well again, no doubt about that, but might just find one or two too good.

Had an awful run in the Railway and dropped out to be beaten 12.5L, which he was probably entitled to do. Drawn awkward again out in barrier 15 and his form isn’t good enough to be competitive here anyway.

Was a surprise winner of the Carbine Club Stakes last week over 1400m and the step up to 1800m here plays into his favour as he’s won up to 2400m before. His first up run behind Inspirational Girl and Too Close The Sun was very good and second up he struck a wet deck, which he just doesn’t go a yard in, so he was there to be found last start. Whether that form is good enough is the query but I wouldn’t discount him from running a big race here at $31.

I thought he was disappointing in the Railway but interestingly Neville Parnham said during the week he thinks he’s just ready to peak now. Not as well suited stepping up to weight-for-age but he is capable on his day so he’s another I wouldn’t completely rule out at $41.

Ran a fair race in the Railway but that’s probably as good as he goes. Drawn the inside gate but he tends to get back in his races and he’s likely to have a few tired horses falling back in his lap. He can run well but outclassed.

On a Perth Cup campaign and the step back to 1800m is an odd and unsuitable one after racing over 2100m last weekend. He does have a good record at this track and distance though so he might run a cheeky race from the good draw. Unlikely though.

He was a huge run in the Railway, flying home from last on the turn to run 3rd. That was the best run of his career and you’d think the step up to 1800m would only suit. The hot tempo that day potentially suited him and he’s likely to get this run at a decent clip again so if he can settle a touch closer, he might be the one flashing home again. Not as well suited at weight-for-age here though, rising 6kg after carrying 53kg in the Railway.

Slightly disappointing in the Railway given he started around $10, but Bob Peters was also a bit critical of the ride. He’d won all three starts leading into that but could only manage 7th, beaten 3L. He won over this distance three starts ago so there’s every chance he’ll be suited by the step back up in distance, and I think he’s on a Perth Cup trail. Positive jockey change with Parnham going on and he can improve, although weight-for-age conditions don’t suit him as well.

Hard not to be impressed by this mare, who was simply brilliant winning the Railway Stakes a fortnight ago. That took her overall record to nine wins from 11 starts and she just continues to improve with every start. She really should be unbeaten. She faces a tougher test today though – while she was completely suited in the Railway under handicap conditions, she has to step up to weight-for-age company today, meaning she carries 57kg and takes on some of the State’s most talented three-year-olds, giving them 5-7kg. The other spanner in the works is barrier 18, which means in all likelihood she is going to be back near last. No doubt she is the horse they all have to beat, but I want $3 to back her, and I think we’ll get it.

Really expecting this mare to bounce back today. She was disappointing in the Railway but I thought she was completely unsuited in that race, carrying 56kg as a mare under handicap conditions. She is a whole lot better suited by the weight-for-age conditions of today’s race. She gets a 0.5kg rise in the weights, while horses like Inspirational Girl and Too Close The Sun have to carry 4kg and 6kg more than they did in the Railway. Draws well in barrier 10 so she should slot in midfield somewhere and if she gets a nice tow into the race, I expect her to be right in the finish.

One of three three-year-olds in this year’s race, carrying just 52kg. He was OK in the Guineas without being terrific and he just seems to be struggling to go on with it as a three-year-old, after a dominant two-year-old season. Draws for a nice run from barrier 3 and I’m sure they will try and have him further forward with the light weight, but happy to oppose.

Outside of Western Empire, he was the run of the race in the WA Guineas, flashing home into 3rd from back in the field. That seems to be the story of his preparation so far though, continually getting back and running home when it’s all over. It will be interesting to see where he ends up from the draw here, as barrier 7 is a much better barrier than what he’s started from all campaign. Under these conditions and with the light weight, if he’s within striking distance at the top of the straight, he’ll give it a big shake. Only negative for him is the jockey change.

I think she’s the clear value in the race at $11. She took out the Champion Fillies-WA Guineas, which is the same feat Arcadia Queen achieved before she romped in to win this race a few years ago. Kay Cee also came through both of those races before winning this race last year. She draws a lovely barrier in 5 here which means she should once again get the run of the race up in the front third of the field. The query with her is whether she runs out a strong 1800m but if she presents at the top of the straight again, it’s going to take a very good one to run her down given she’s got just 50kg on her back. Happy to have something on and expect her to run very well.

First emergency and unlikely to get a start but if she did, she would be in this race up to her ears. She had no luck first up in the Belgravia Stakes, blocked the entire straight before surging late. She atoned for that with victory in the Burgess Queen second up, and then probably didn’t run to her best in the Champion Fillies Stakes on a very heavy deck. Worth noting she started a $2.40 favourite for that race, which Watch Me Dance won, so if Snickerdoodledandy made her way into the field, she’d arguably become the horse to beat.

Second emergency and unlikely to get a start. His run was the run of the race in the WA Guineas last start, running home powerfully from the back of the field to be beaten 1.8L into 4th. It’s a big ask to win a WFA Group 1 at just your fourth career start, so that would be the main query, but the 1800m looks right up his alley and he draws a lovely gate in 6. Down in the weights, he’d be a huge player if he gained a start, but he’ll be lining up in one of the earlier races if he doesn’t.

I’m happy to just back two horses here, those being (12) Inspirational Girl and (16) Watch Me Dance. I think the Railway winner is clearly the horse to beat, but with a couple of handy horses down in the weights, and more so barrier 18, it becomes a bit interesting. Watch Me dance comes through a set of races which have proven very good references for winning this race in the past, and she should get a lovely run again. At $11 she’s clearly the value.

Outside of those two, (16) Dom To Shoot has to be included with just 52kg after another big run in the WA Guineas, while I expect sharp improvement from (13) Kay Cee. (4) Too Close The Sun can run well as he always does, while the other Parnham horses (6) Neufbosc and (7) Platoon are the blowouts.