Connect with us
Mt Barker (7 Races) 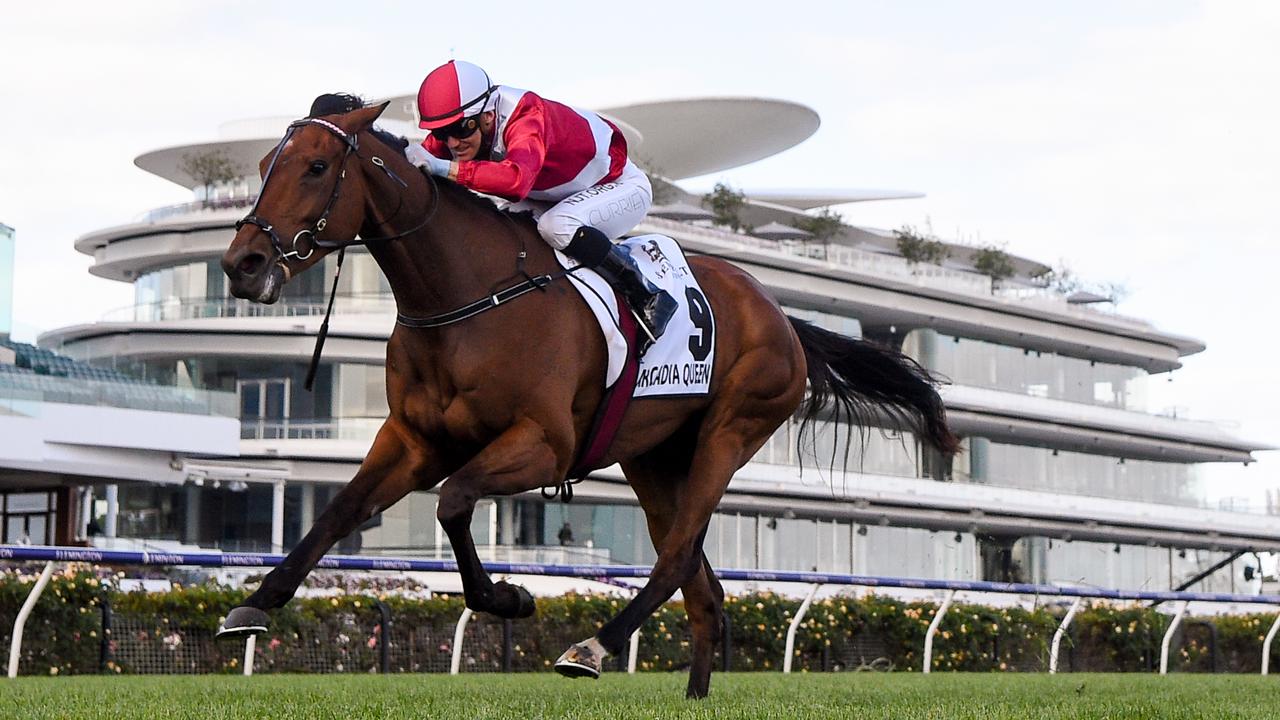 After a Spring carnival of mixed fortunes, leviathan owner Bob Peters has assembled a star-studded line up to travel East in search of the upcoming Autumn riches.

It was a frustrating, but ultimately successful Spring campaign for the Peters assault. 2020 All-Star Mile winner Regal Power succumbed to a lung infection early in his preparation, while Arcadia Queen was victorious in two Group 1s despite battling feet problems.

Excitement machine Showmanship took his record to seven wins from eight starts with consecutive victories in Melbourne before injuring a tendon. Perfect Jewel was victorious in the G3 Cockram Stakes and Windstorm notched up two wins, but 2020 All-Star Mile runner-up Superstorm endured a luckless campaign, with a third placing in the G1 Toorak Handicap his best result.

This time around, Peters will travel up to five horses. They include Arcadia Queen, Regal Power, Perfect Jewel, Celebrity Queen and potentially one of his three-year-olds.

Tim Geers profiles each WA horse set to compete in the upcoming carnival, detailing their progress to date and their likely targets throughout the Autumn. 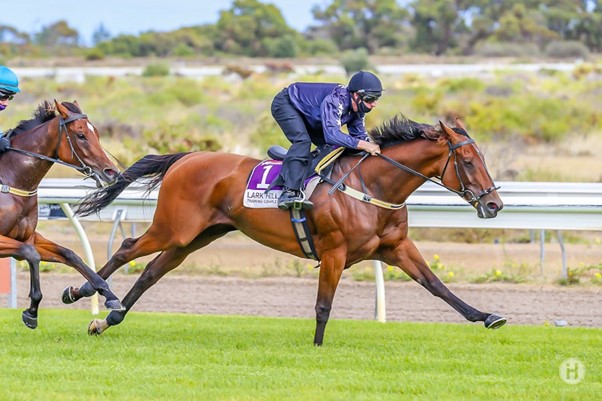 The stable’s pin up girl returns to Melbourne having ended her Spring campaign with victory in the G1 Mackinnon Stakes. That was on the back of a luckless effort in the G1 Cox Plate, where she was lucky not to fall, and that followed her victory over Russian Camelot in the G1 Caulfield Stakes.

From all reports, she’s returned in very good health. Her Spring preparation was interrupted by continual feet issues, caused mainly by a stone bruise leading into her first run. She wore bar plates for the majority of her time in Melbourne, but there were no signs of those when she had her first trial back at Lark Hill on Tuesday (9/2). Bob Peters reported that her feet are good this time around, and with that in mind, there’s a good chance we could see further improvement on what she did in the Spring. Scary thought!

There was a slight hiccup last week when the trial she was meant to line up in was cancelled due to the WA lockdown, but Peters did note that they pretty well made up for that with a solid gallop at Lark Hill the next day. She won her 950m trial on Tuesday (9/2) morning, which you can watch below.

She goes into Saturday week’s (20/2) G1 Futurity Stakes over 1400m first up, with William Pike booked to ride, before tackling the All-Star Mile at The Valley three weeks later. She should be exceptionally hard to beat in both races.

It was interesting to see Peters note how if he had his time again, he would have instructed William Pike to go forward on her in the Cox Plate, noting that from low draws, you can often end up getting squeezed between runners around The Valley’s circuit. It will be interesting to see where she draws in the All-Star Mile; if she draws wide, expect her to go back, but if she draws a low gate, I would be betting on the fact we’d see her ridden very positively early.

The Peters and Williams camp was dealt a major blow early in their Spring mission, when reigning All-Star Mile winner Regal Power was sent home after just two starts due to a lung infection.

Reports are he’s recovered very well from that set back and has been given a long spell before returning this time in. He’s normally a horse that takes a bit of work to get fit, so missing last week’s trial certainly wasn’t ideal for him, however just like Arcadia Queen, he was given a solid gallop to make up for it.

He also trialled at Lark Hill on Tuesday (9/2) over 1450m, with William Pike stating his plan was to save him up for a late run and rush home over the top, but he got there a fair bit earlier than that. He looked very good in winning his heat and travels over to Melbourne on Monday night (15/2) to run first up in the G2 Peter Young Stakes (1800m) on February 20.

I would assume he will need the run in the Peter Young Stakes, given he’s only placed once from five starts fresh, but look for him second and third up when he’s fit and ready. Following that, if he’s going well, there’s every chance in my mind that he could make his way to Sydney to eventually contest something like the Queen Elizabeth Stakes.

He is currently rated a $16 chance with Ladbrokes in the Australian Cup, and a $26 chance with Sportsbet in the All-Star Mile.

Perfect Jewel was a surprise winner at her first Melbourne start in the Spring, winning over 1200m in the G3 Cockram Stakes. She went on to run a narrow 2nd to Mystic Journey in the G2 Stocks Stakes at Moonee Valley.

She’s not quite a top-liner, so we can expect her to poke around in G3 and G2 mares races throughout the Autumn. Something like the Mannerism Stakes (1400m, February 20) looks a suitable option for her first up, or the Frances Tressady Stakes (1400m, February 27) a week later. She could then progress to the Matron Stakes (1600m, March 6). I think the G2 Sunline Stakes at Moonee Valley on March 19 looms as a good race for her, likely third up from a spell.

Although she won first up in Melbourne last preparation, I’d be surprised if she was able to do that again this time around. She was only nine weeks between runs when she won the Cockram Stakes, and had raced four times in Perth before travelling over. So she would have had plenty of residual fitness on her side.

This time around, she’s had four months between runs and just the one trial. She has failed to fire first up in her past three campaigns in Perth when going in first up off a similar set up. So I’d be happy to watch her go around first up and look for her to really improve second and third up.

She ran 2nd in a Belmont trial last Friday, which can be seen below.

One horse that didn’t come across in the Spring and will make her Eastern Stakes debut is Celebrity Queen.

She’s an awfully consistent mare, missing the top three just twice in her 12 starts. She proved somewhat of a surprise packet last prep and arguably could have won the G1 Winterbottom Stakes with a bit more luck.

She ended up running 2nd to Elite Street on that occasion (another WA horse to look out for this Autumn) and then 2nd to Kementari in the G3 Scahill Stakes last time we saw her.

She won a trial last Friday at Belmont (see below) and has already arrived in Melbourne ahead of a first up tilt at the G1 Oakleigh Plate at Caulfield next weekend (20/2).

She’s undefeated from three starts when first up, so she certainly can give that race a decent shake. If she performs well there, she’ll likely make her way to the G1 Newmarket Handicap at Flemington on March 6. Two weeks after that is the G1 William Reid Stakes at Moonee Valley, which looks a logical step for her if she’s run well in her first two starts.

She is currently rated a $17 chance in the Oakleigh Plate with Sportsbet and a $34 chance with Ladbrokes for the Newmarket.

Bob Peters made mention on radio on Tuesday morning that he was looking to find a three-year-old to send to Melbourne if he felt they were up to the task. He mentioned he had seven racing at Bunbury on Thursday (although 10 are nominated) and two in Saturday’s Challenge Stakes at Ascot.

The 10 that are nominated for Bunbury are Brave Battle, Powerful Force, Real Charisma, Antique Jewel, Pure Devotion, Reliable Star, Real Passion, Testing Love, Prized Miss and Spritely Star, while Western Empire and Magical Dream are the two lining up at Ascot on Saturday.

Of them all, the most logical option to take to Melbourne would appear to be Western Empire, who is sure to be popular with punters in the Challenge Stakes. He’s only got one win from his first five starts – an easy maiden victory at Bunbury – but he’s performed very well in defeat in some much harder races without a great deal of luck.

He was enormous in the WA Guineas before being ridden upside down in the Sir Ernest Lee-Steere Classic, where he finished 3rd.

Don’t be surprised to see him come out and win this weekend’s Challenge Stakes before heading to Melbourne to contest the three-year-old feature races, such as the Australian Guineas on February 27. Could we see him run well in that and be given a wildcard entry into the All-Star Mile, just like his stablemate Superstorm last year?

He’s currently rated a $26 chance by Sportsbet in the Guineas.

Not one of Bob Peters’ brigade, but he’s another West Aussie who is in Melbourne ahead of the Autumn carnival.

The Dan Morton-trained sprinter went from a maiden at Belmont to a G1 Winterbottom Stakes victory in the space of six months. His record says he’s only won five races, but he’s actually won his past six straight – he had one taken off him after returning a positive sample.

It will be fascinating to see how he measures up against some of the country’s elite sprinters. There is the case to be made that he made Trekking look second rate in the Winterbottom, but Trekking has now come over two years in a row and failed in the Winterbottom.

Morton seems to think this horse is the real deal and his whole preparation has been aimed toward having him set for the G1 Lightning Stakes and the G1 Newmarket Handicap. He lines up in the first of those this Saturday (13/2) where he will face the likes of Bivouac, Nature Strip, Pippie, September Run and Anders amongst others.

He goes into the race first up without a public trial, but Dan Morton reported that he’s come across very fit and had an unofficial trial down the Pinjarra straight on Saturday (6/2) morning. He arrived in Melbourne on Monday (8/2) night and will line up in the G1 at Flemington on Saturday.

His Melbourne campaign will consist of just the Lightning and the Newmarket before they take him back to Perth.

He is currently a $14 chance with Ladbrokes for this weekend’s Lightning Stakes and a $26 chance in the Newmarket.