Tim Geers previews every race on the card at Eagle Farm on the final day of the Brisbane winter carnival, G1 Tatts Tiara day. 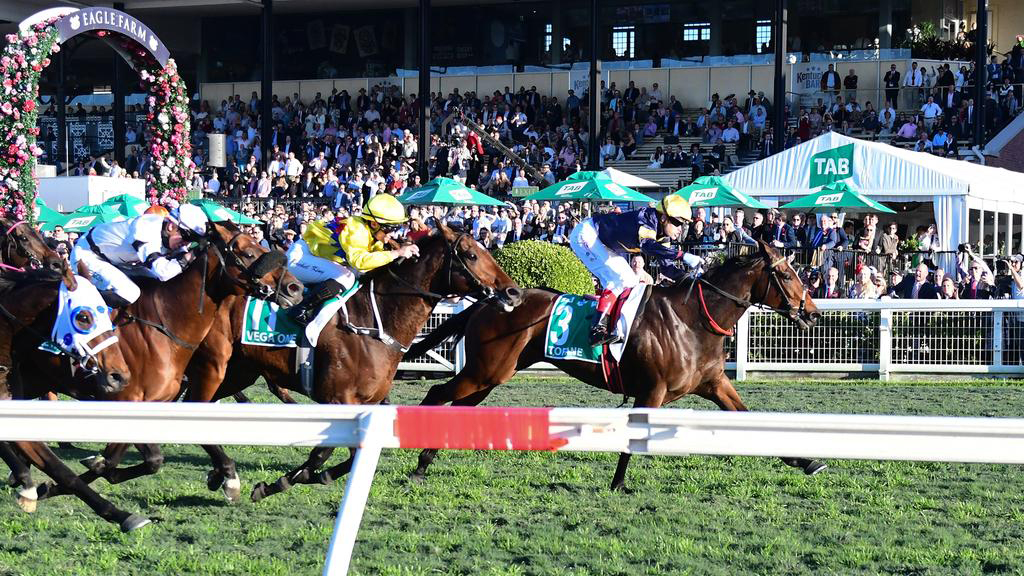 The meeting is headlined by the Group 1 Tattersalls Tiara, which is the final Group 1 of the 2020/21 racing season.

There are nine races on Saturday’s card, with the track is currently rated a Good 4 with the rail out 6m.

Tim Geers has previewed every race on the card, with his best bet coming in Race 4, and his best value in Race 9.

Find his preview, tips and betting strategy below!

(3) Tutukaka just needs to turn up to be winning this. He nearly went in the list of horses to follow after his last run here three weeks ago in The Phoenix, where he came from near last and ran home strongly into 3rd. Up in distance to 1830m now which should really suit him and with even luck he’s the horse to beat.

I think (1) Redoute’s Image is well and truly short enough here at her odds-on quote. She bolted in at the Sunshine Coast last start but that was a weak race and she got the dream ride and run from Craig Williams. She steps up in grade here and will face a firm Eagle Farm track, so it’s a bit of a stiffer test than what she had last time, literally.

(3) Hancora Field had good juvenile form before failing to replicate that last prep. She’s had a decent break leading into her first up run today. She’s undefeated at the track and distance and if she was able to replicate her two-year-old form, she’d be a blowout chance at $20 here.

(4) Better Than Best comes off a first up run that was just fair, but she put in a similar effort first up last prep before bolting in second up. That was on her home track at Toowoomba, not here at Eagle Farm, so that’s a query, but strong jockey booking with Ryan Maloney up today. Has won two from three when second up and draws well. Looks a value chance at $9.50.

(9) Microwave Jenny was good enough first up and did win second up last prep. Respect.

Tony Gollan pretty well declared (1) Mass Destruction here. He’s had six starts this prep for five minor placings, and has run 2nd at his past three starts. Never missed a place here at Eagle Farm, draws well, gets Ryan Maloney on and was only beaten a nose last start. Gollan couldn’t have sounded more confident in his chances. The query for mine is a) his inability to win this prep and b) the extra weight he has to give his rivals, but I do think he brings the best form and gets his chance.

(5) Kingston’s Here bolted in first up at the Gold Coast but that was only a Class 1. Compare that to the Listed race Mass Destruction ran 0.1L 2nd in last start and it’s hard to get him $2.30 in my opinion.

(6) Garoppolo gets an 8kg weight swing on Mass Destruction from last start after finishing less than 2L behind him. Just don’t know how well he’s going.

(3) Acrobatic has ability and looks the value chance at double figure odds.

I concede (1) Polly Grey brings the best form to this race, but I can’t get her $2.30 based on her previous good track form. Every single one of her career wins have come on rain-affected ground, and she’s yet to break through from 10 starts on firm tracks. She may well be good enough but I have to take her on at that price.

Keen to be with (6) La Grisa who is almost the opposite – all four career wins have been on good ground, while she’s never won from 10 starts on wet ground. Her first two runs in Sydney can be forgiven for that reason and she looks suited here third up, up in distance, back on good ground and with the inside draw. Each way price available.

(5) Windermere has run 3rd in both starts back from a spell. Those formlines have proved to be OK, with Happy Go Plucky coming out of her last start and running 2nd to Incentivise before winning the Ipswich Cup. She has a good third up record with two wins and a 3rd from three starts, so despite the wide draw, she has to be included at $11.

Literally a race for the QLD picnic horses here, of which I have less than 0 idea about.

I’ll follow the old Barcaldine formlines here with (4) Ahwahneechee and (6) Fully Maxed. Ahwahneechee has won four of his past five starts, with only defeat being by a nose two starts ago. He started $2.30 last start at Barcaldine and won comfortably, while Fully Maxed started $2.00 after bolting in his first two starts this prep. Humongous jockey upgrade for Fully Maxed today, along with a better barrier draw. Those are the two for me at $5.00 and $10 respectively.

(4) Incentivise shows up here, probably to get his rating up before he heads down to Melbourne. He’s won his past three starts by a combined margin of 25.8L. The horse he beat by 9L two starts ago then came out and won the Ipswich Cup, so there’s plenty to like about him. Obviously there is a query whether this is an afterthought and also that he tackles one or two actual horses here, but he’s going to be too good in any case.

(6) Shooting For Gold looks hard to beat fresh here in a suitable race. Has a good first up record, won first up last prep, trialled well recently and has room to go to a new level this time in.

(9) The Sinner has the ability to be competitive in a race like this. He’s also got a good firs tup record and also has three wins over the 1000m. Two preps ago he was dominant fresh and there’s been some money in early betting to suggest he’s going well.

(3) Ditmas didn’t fire fresh last prep but he has three wins from five starts first up and also goes well here at Eagle Farm. He resumes off a long spell but is one to include at $21.

(4) Devil’s Temptation was dominant last start and gets Maloney on from a good draw.

The G1 Tatts Tiara rounds out the Brisbane winter carnival and is the final major of the current racing season.

(16) Odeum was enormous in the Dane Ripper Stakes, which is a reliable form reference for the Tatts Tiara. She sat four-wide the trip, hit the front and only got run down late by Brooklyn Hustle who had the perfect suck into the race. Odeum carried 58kg on that occasion but drops to 55.5kg here. The huge negative is that James McDonald can’t ride due to covid and has been replaced by Andrew Mallyon. Still, at $6.00 she is a bet.

(1) Tofane backed up her good run second up with victory in the Stradbroke Handicap last start. She’s now a dual Group 1 winner and this is her best distance at this stage of her career. Gets a wide draw but C Williams sticks and she’ll be very hard to beat in her swansong.

(3) Mizzy throws a real curve ball into this race. She’s been very competitive at Group 1 level not long ago, and she switches stables from Anthony Cummings to Annabel Neasham for her final start, which is a huge stable upgrade in my opinion. Unconventional lead in to this race but if she turns up and improves on her best form, she’ll be going close enough to winning.

(7) Brooklyn Hustle is starting to put it all together. She won the Dane Ripper, which as I said before is a reliable form reference for the Tatts Tiara. She did get a blessed run/ride last start to win, but she’ll be in the right part of the track again here.

If (18) Sierra Sue gets a run, throw her in exotics at $61. She wasn’t bad with no luck last start, gets blinkers on for the first time here and a good draw.

Have to include (5) Madam Rouge and (8) Subpoenaed, with Bowman jumping off the former to ride the latter today.

(10) Hail Manhattan went in the horses to follow file after his first up run over 1000m. I noted that day that he is probably looking for 1600m, but he did win second up over 1200m last preparation. He hit the line well in inferior ground and I thought it was a good return. This is an open race but I wouldn’t put it past him to be right in the finish at $18.

(6) Away Game was good first up, not beaten far after leading. Might be ridden a bit colder from the wide draw today. Can go close.

(9) Jen Rules is an emergency for the Tatts Tiara. She’ll line up here though. Was only beaten 1.25L last start in the Dane Ripper, which looks the best form line for the Group 1. Has to be competitive here.

(15) Bella Nipotina has her first start for the Maher/Eustace stable and gets C Williams booked to ride first up. A few gear changes and plenty of early money to suggest she’ll go well. She ran 3rd behind Isotope and Odeum two starts ago which looks very good form.

(3) Exhilarates was poor last start but is better than that.