Racing at Caulfield on Saturday and Trent Crebbin is very keen on his best bet. 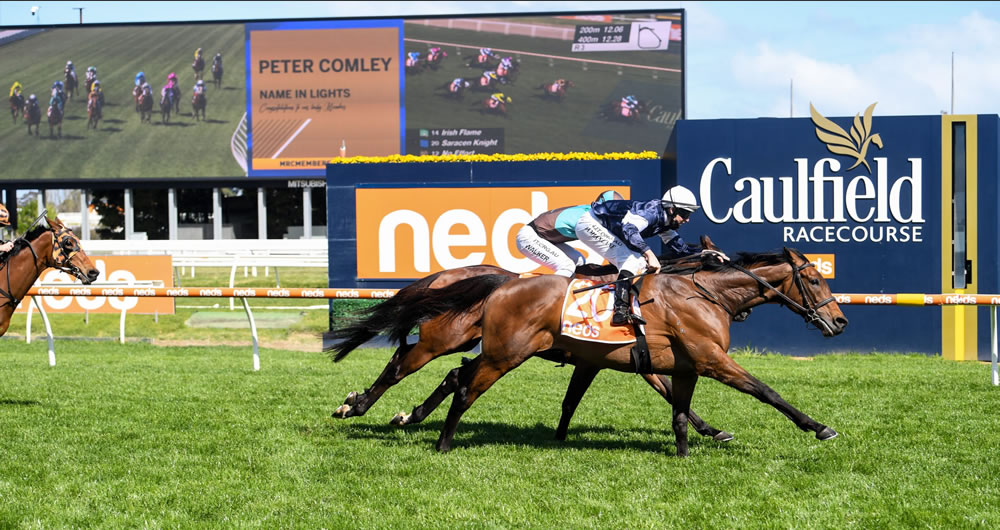 Racing at Caulfield this Saturday for a strong nine-race card.

Trent Crebbin has done the form and is outlaying 6 units in Race 5!

The track is rated a soft 5 with rain on Friday and the rail is out 12 metres.

(2) Jigsaw jumps off the page with his form last prep. His debut win was excellent, smashing Blue Diamond winner Artorius in fast time, and he was rock solid in the prelude and Diamond. I prefer him at 1100m over 1200m and he’s jumped out very well. Zahra on, should lob just behind the speed and it’d take a pretty good horse to beat him.

(8) Viviane has clearly improved from last prep to this, running 2nd to boom filly Argentia at Flemington first up. That could turn out to be quite good form and with 54kg on her back and Lane sticking she’ll give a sight.

(5) Vianello’s form is also very good, beaten 4L by Stay Inside in Sydney last prep. The Riesling run was fair against the girls.

Tricky race. (6) Veranskova has been well backed but I think she’s short enough now given how far back she’s likely to get. The debut behind Written Miss was very good and she was too strong at Sale. I’d expect they go right back from the gate and that could be a problem with the rail out 12 metres.

(10) Chosen Blonde ran well at Mornington last start and can potentially lead these with Olly on. She mixes her form a lot and 1200m is probably as far as she wants, but she’s not hopeless.

(12) Musk Lollie has only seen heavy tracks but was far too good in a Ballarat maiden last start. Interesting that Kah goes on.

(3) Bubbly Lass ran very well last start but like the favourite is going to get a long way back and need some luck.

Happy to stay out and see if the two fancies can make ground. If they struggle, look to bonus on pace horses.

(6) Dickin Medal was a clear forgive first up down the straight, pulling up with cardiac arrythmia. He was rock solid in the betting there, starting $5 behind All Of Brighton at level weights. Back around a bend with Kah on, his form last prep including a 2.4L defeat to Portland Sky is easy to like. Back to 1000m is some query but they’ll go fast.

(5) Peggy Selene plummets in the weights after carrying 58kg last start and 51kg here. She was only 1.1L off Meteorite which is solid form and 1.8L off Zipping Boy first up. At double figures, she maps for a nice run behind the speed and looks overs.

(1) Malkovich is a very interesting runner down from Sydney. He’s very fast and might be able to cross and lead, but he definitely won’t get a picnic in front and will have to burn the candle at both ends with 61kg.

(11) Over The Sky is very progressive and is now 4 from 7. He was nearly run down last start stepping up to 1600m with Zahra suggesting he waited for them. Tricky draw.

(5) Thought Of That gets Kah on first time and was quite good first up. Potential of a soft track isn’t in his favour and he’s 2 form 17 overall.

(13) Petruchio ran on very well first up in the same race and has plenty of upside. 2nd up off a similarly long spell last time he ran 2nd to Zayydani which is solid form. Map is a query and he likely gets back but looks the best closer.

(19) Chief Altony is unlikely to get a run but if he does I’ll be backing him. He probably should’ve won the same race last start at even money and can atone, but needs five scratchings.

Faithful Diamond has unfortunately been scratched. Look for it in an easier race. Something on Petruchio, saving Chief Altony if he somehow makes the field.

(6) I’m Thunderstruck looks the best of the day and the $2 around might go off. The debut win last prep was excellent, the brutal Autumn Stakes was too much for a horse at start number 2, and the first up win at Sale was dominant on a heavy track at $1.60. Drops from 60kg to 56kg, Zahra sticks, the draw is ideal and he should be winning.

(2) Imperial Hilton the obvious, and only danger in my opinion. He was backed off the map in SA last start and bolted in by 4L. Maps for a very similar run and I’d be shocked if he missed the top 3.

Outlaying 6 units, making Imperial Hilton the place a chop result, the win a breakeven but confident we collect on both runners and potentially the quinella.

(4) Absolute Flirt is the horse to beat first up. She was far too good in a similar race first up last prep and then ran a very good 3rd to La Mexicana and Miss Albania, both of whom are better than anything in this field. As long as Lane doesn’t go right back, which would be crazy given she has natural pace and there’s only one turn, she should go close.

(6) Kalkarni Royale was too strong on speed at Geelong and is racing well.

(2) Plaquette settled closer and was too strong last start. She was home hard first up and will be thereabouts again.

(1) Pinyin was desperately unlucky in that race as usual and will get back and charge.

Giving one more chance to (10) Fifth Position who looks primed 3rd up. I think the good track was against him last start- from everything the stable and international form analysts have said he’s much better on a soft track, which he should get here. He was steadied the last 50m last start when perhaps not letting down fully, and drops to the minimum weight here. Should get a lovely run and he’s backable.

(9) Lunar Flare was given an outstanding ride to win that race, ducking and weaving from back in the field. Dee will need to give her another one from barrier 12 but she’s flying. She did have an extra run under her belt there but was $5 and is double that here.

(8) Last Week and (13) Tan Check ran 1-2 at Edenhope, with the former meeting the latter much better at the weights despite beating it home.

(5) Bedford loves Caulfield and hit the line hard at Sandown.

(12) Fundraiser looks an attractive price here. I think he’s a horse that keeps improving and was very good first up at Swan Hill with 61kg over 1200m. He went through the grades last prep and did run very well on a brutal tempo when going out far too hard over 1500m in bm84 grade. Gets a lovely run for the airborne Zahra and at double figures he’s a good chance.

(11) Corner Pocket is flying and has done nothing wrong, but I don’t rate him much higher than Fundraiser. He’s had a gap between runs and but his last run was the best of his career, absorbing pressure and kicking away.

(7) Kinane would be a huge hope at his best if he can get back to it and has jumped out well with Kah taking the ride.

(14) Sir Kalahad (bless him) will give them something to catch if he makes the field, but 1400m is a query and he clearly had the bias in his favour last start. Still, he’s a very honest horse and isn’t the worst.

(14) The Gauch is the horse to beat. He wasn’t ultra-convincing first up but did enough and given he was first up at 1200m I’d expect there’s improvement to come. Onto a soft track is a bonus and he maps for an identical run.

(9) Ocular beat him when they met at Bendigo last prep, starting $4 to The Gauch’s $3. The Gauch meets him 4kg better at the weights and I don’t mind him back in trip after a very solid run in open company last start.

(7) Ruban Bleu is the roughie I could make a case for. He was huge first up behind Zipping Boy which ties these in easily, and he was enormous 2nd up last prep at this T/D, 1.5L off Sword Of Mercy. The prep before that he was 0.6L off Alfa Oro so he can definitely run well, it’s just where he gets to from barrier 3.

(4) Simply Optimistic is going very well and was rock solid in the Wangoom.