Mackinnon Stakes day at Flemington for the final day of the Melbourne Cup Carnival and Trent Crebbin has previewed every race. 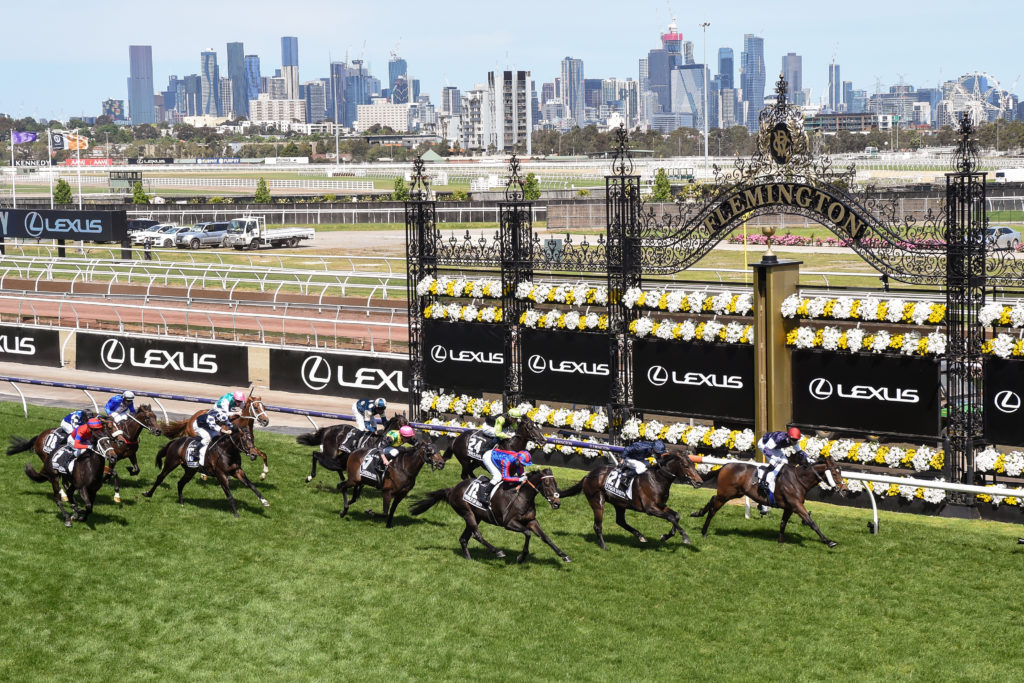 The final day of the Flemington carnival is headlined by two Group 1s, the Mackinnon Stakes and VRC Sprint.

After a good day on Thursday, Trent Crebbin has previewed every race on the card.

The rail is out 8 metres and the track is currently a good 4 but with 5-15mm predicted we’ll probably be on a soft 5, soft 6 at worst.

Find our Flemington racing tips for Stakes day below!

(5) Hosier went unbeaten last prep working through the grades nicely, culminating in a gritty win over Tooradin at 2000m. He’s got plenty of talent and upside but I don’t want to back him first up at $2.30.

(7) Silent Sovereign was good late first up behind Imperial Lad who got all the favours on a night you wanted to be on the fence. 2nd up last prep she was only beaten 2.4L by Sovereign Award and Quantum Mechanic at this T/D which reads quite well. She’ll get over further but should run well.

(9) Equation has been going okay in Sydney without everything going his way. He was solid in the Silver Eagle in a messy race and covered plenty of ground last start with 59kg and Brock Ryan on. Drops 4.5kg in weight and gets Jmac on from a good gate, he might be looking for the mile now and it’s almost at the point where you just have to back Jmac.

See no reason to be against (4) Lunar Flare who is flying. She’s showed a great turn of foot in her last two wins, the latest in the Moonee Valley Gold Cup, beating Floating Artist. I know he should’ve won, but even running 2nd to him is a great form line. Looks well placed with 56kg (1kg less than WFA against Warning) and can win again.

(1) Warning is coming down from Sydney off a win in the St Leger. He was very well backed there and just got there. I don’t think he beat a field at their peak but Nash sticks with him and we know he likes Flemington.

(5) Wentwood has to be respected coming off a win in the Bendigo Cup. He’s absolutely flying and if he’s here I won’t be losing on him. Maddie Raymond has said if the track is too wet they’ll scratch but I don’t think it will be this early. He was too tough for Smokin’ Romans and a couple of other good horses in the Bendigo Cup, stays down on 54kg and will be hard to beat.

Looks the perfect race for (6) Alcyone who was unlucky last start and probably should’ve won. He was backed into $2 there and put in a pocket by Prebble on Durston, with Mankyan running 2nd. The run prior over 1600m he was excellent behind Mr Brightside who ran a narrow 4th in the Cantala. 4th up now, with the 2000m run under his belt, at Flemington, draws a middle gate, there’s a lot to like and he should be very hard to beat.

(13) Vitruvius is progressive having only had 5 starts and coming off a solid win at Geelong. 2000m should be no issue but he could be giving Alcyone a head start from the barrier which will make it tough.

(5) Tyche Goddess will be up on speed and keep kicking, coming off a good 2nd in the Pinker Pinker plate behind Mahashakti. The booking of Nash is ideal for her from barrier 2 but I don’t think she’ll get it all her own way.

Very tough. (2) Scissor Step was very good from last in the Red Anchor behind Generation in a fast run race. He was solid in the Blue Sapphire prior covering ground and looks suited getting to 1400m, but he draws very wide here and will need a good ride.

(3) Port Louis was disappointing last start in the Blue Sapphire after a good run first up at The Valley. Out to 1400m and blinkers on could spark some improvement, but he’d need to find a few lengths.

(7) Decent Raine was good behind Fangirl in Sydney last start and probably should’ve run 2nd. Fangirl has come out and bolted in on Derby Day so the form is good. I was keen to be with her at double figures on Oaks Day but they’ve saved her for this.

The one at massive odds that can surprise is (15) Soobooma. He was good last start at Sale, finishing 0.5L off Sudoko. That horse then started $6.50 in the Red Anchor and was only 3L off Scissor Step who started $16. Up to 1400m looks good, the draw looks okay and Mcneil rides.

Another open race for the mares. (8) Zayydani looks a nice price at double figures. She’s been building nicely for this 4th up run. First up her last 400m was only bettered by Young Werther, 2nd up she was the fastest last 600m behind Floating Artist and last start she was beaten a length in the Coongy. Don’t love barrier 2 but she profiles well.

(15) Mahashakti started favourite last start at The Valley and was perhaps ridden upside down, fading to finish 5th. She was very good winning the Pinker Pinker Plate the start prior and that was an uncharacteristic poor performance last start. Drawn wide here she’ll be given a quieter ride and could show up.

(3) Starelle is building towards a win. She’s been good in all her runs this prep, the latest behind Flying Mascot in a fast run race, clearly beating Annavisto and Princess Jenni home. 4th up at 2000m, drawn a nice gate, she’ll be absolutely peaking here with Lane taking the ride.

(5) Mimi’s Award is another suited up to 2000m and has been well backed. 3rd up last prep she bolted in with a bm58 before winning the SA fillie’s classic. Query where she gets to from the draw.

It’s a disappointing field for (1) Nature Strip to face in the VRC Sprint and barring him standing in the barriers he should be giving these a belting. He’s the best sprinter in the world, the best sprinter since Black Caviar and in career best form having finally won the Everest last start. His only defeat at this T/D was in last year’s race when Bivouac was simply unbeatable and Nature Strip wasn’t 100%, but he still beat home better horses than he faces here. Don’t think it matters which lane Jmac picks from barrier 2, he’ll just get into a rhythm, nurse him to the 400m and let rip. I’d launch him at $1.60 but I doubt we get it. Happy to just watch.

(3) Splintex can run a place if the track is dry. He won over this T/D two back and was only beaten a length last start in the Linlithgow. He just doesn’t want it wet.

Surprised (9) Ranch Hand is here for Waller but he was good in the Coolmore. Home Affairs went to a new level but even still, Nature Strip beat Home Affairs by 5 lengths in the Everest so I can’t see the 3yo form troubling the favourite.

(6) Bella Nipotina is flying and will run another honest race. She’s a decent place bet at even money just based on her consistency.

Hoping it’s not too wet because (13) Morvada is going very well without winning. He wasn’t suited last start having to concede Buffalo River 1.5kg on a soft 7 but battled well through the inferior ground, beaten 3.3L. His run prior was very good at this T/D in a similar race won by Justacanta who he now meets 6kg better at the weights when taken on in the lead. There is a bit of pressure but I think he can sit outside the leader from barrier 9 and he’s so consistent over 1400m.

(14) Riddle Me That was good behind Kahma Lass and Buffalo River two back at Caulfield before another solid showing in the Sale Cup at 1600m last start. Back to 1400m at Flemington looks ideal.

(6) Age Of Chivalry is the other I’m going to back. He was solid over 1200m first up but has a very good 2nd up record with 2 wins and 2 thirds from 6 starts. He started $5 to Riddle Me That $11 when they met 2nd up last prep and Lane sticks with him from a soft gate.

(11) Chaillot is on the quick backup which I don’t love. She races best fresh and it seems as if they set her for the Empire Rose last week after a freshen up but she couldn’t win so they’ve thrown her in this as an afterthought. I do think Flemington 1400m is her best T/D and if she was coming into this fresh instead of the Empire Rose she’d clearly be on top.

For my runner by runner preview of the Group 1 Mackinnon Stakes headlined by Zaaki, please follow the link:

Going with (4) Destination on top in the last and hoping Jmac can end a huge carnival on a high. He’s been freshened since running in a 955m last start behind Curran who has run well in stronger races since. Destination pulled up lame there so happy to forgive, and his best trip is 1100m. He’s trialled since at Hawkesbury and won it narrowly under a hold, draws the right part of the track and the run at Caulfield when 2nd to He’s A Balter has turned out to be a good form reference with Dirty Thoughts and The Gauch behind him.

(5) It’sourtime has some solid 3yo form and did run 2nd to Oxley road two back at Caulfield which reads well for this. He was smashed in the guineas but it wasn’t the right race for him and he’s probably more of a sprinter. Interested to see how he’s come back.

(3) Sam’s Image can pull out a fresh run and won well beating Simply Optimistic at Bendigo first up last time in. That was bm84 grade so he’s clearly up to this and draws to find the outside rail up on speed.

(14) Duchess Of Dorset is flying and won well but had everything in her favour last start at Bendigo. The time was good but this is much harder down the straight.