Tim Geers casts his eye over the 10-race card at Randwick on Saturday, headlined by the Group 1 Winx Stakes! 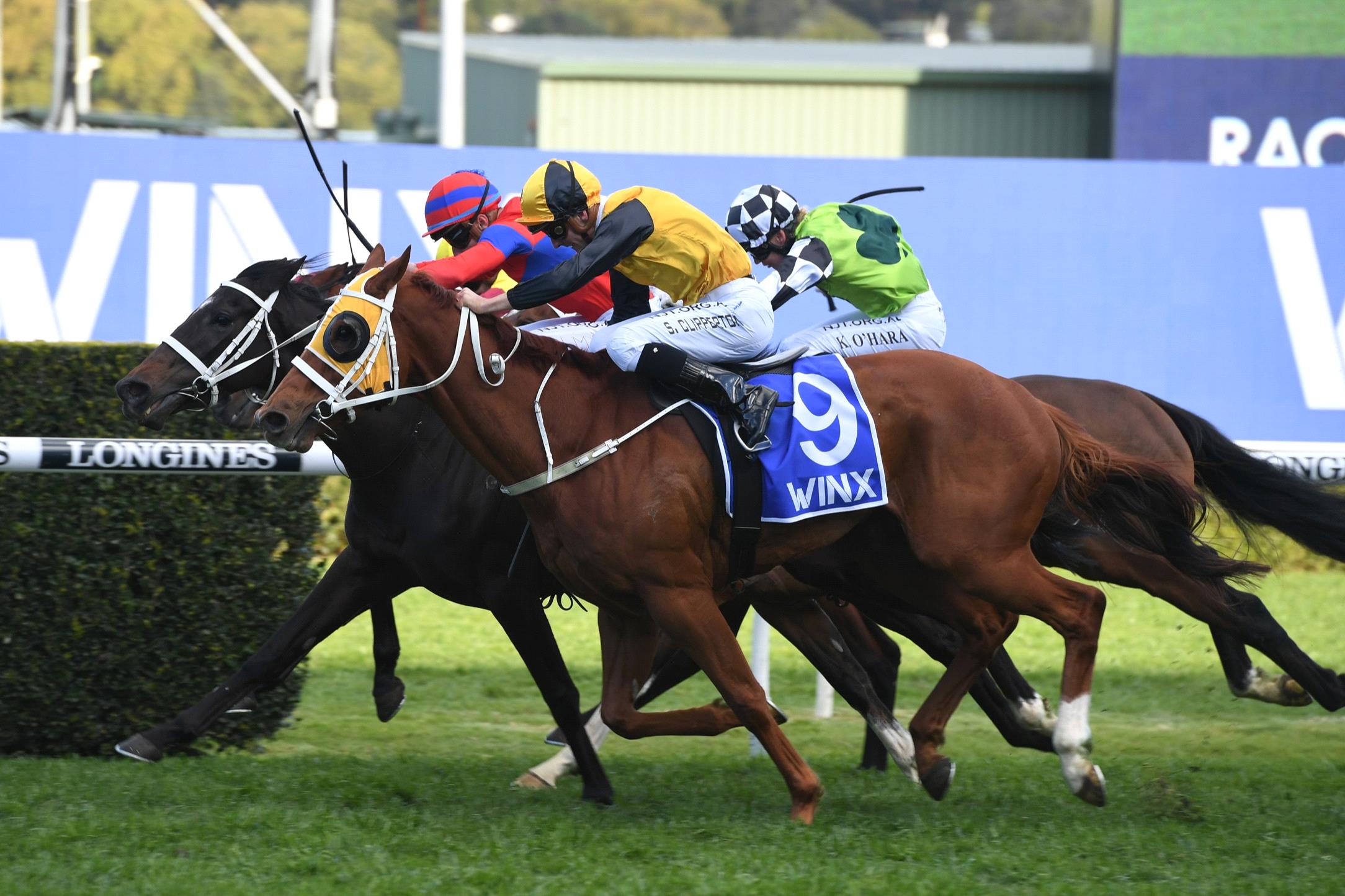 Group 1 racing is back!

Royal Randwick hosts the first major of the 2021/22 Australian racing season, with the Group 1 Winx Stakes headlining the racing today.

The day’s feature sees a field of 14 set to line up over 1400m, including eight Group 1 winners, and is supported by the G2 Silver Shadow Stakes and the G3 Show County Quality.

We have 10 races in total at Randwick, where the track is rated a Good 4 and the rail is in the true position.

Tim Geers previews every race on the card below, complete with his tips, best bets and betting strategy.

We start the day off with a Highway and despite tipping both the Highway and the Midway winners last week, I’ll be sticking to my ‘no bet’ strategy for those races today.

With that said, it does look a very good race for (17) Battleground, who has his third start for the Matt Dale camp today. First up he resumed in a race much harder than this, where he was narrowly edged out by Sixgun. His only career win came when he was second up, James McDonald is booked today and although he has to carry the grandstand in weight (62kg), it does look a nice race for him.

(7) Dancing Dollar looks to have been set for a first up tilt at this race. Won first up last prep and has had an extra trial this time in, which suggests they’ve got her pretty fit.

(8) Ten Bells is only lightly-raced and comes into this off a good first up win. Has scope to improve.

(2) Shuffle Up relished stepping up to this distance and getting back onto a good track last start, winning on the Kenso track here at Randwick. He’s only had five runs this prep and is three weeks between runs, so should be fresh enough. The horse he beat last start was Terwilliker, who ran 3rd at his next start.

Interestingly, (3) Master Shuhood ran 2nd ahead of Terwilliker in that race, so he can be tied in here. He is another horse that appreciated getting back onto firm ground last start. The Harpo Marx form line looks pretty strong so I think he’s the clear value here at $17.

(7) Red Santa comes up from Melbourne and was a big run in defeat after sitting wide throughout last start. Some query on the strength of the form though.

(1) Monegal was huge first up before a flat run last start, but he tends to do that second up. He’s only ever placed twice from seven attempts when second up, but does have a win and three placings from six starts when third up, so he can improve today. Loves this distance too.

(16) Enduring Night is going well, just keeps leaving itself with too much to do. Should find this easier than its past couple of starts but may just like the track with a bit more juice in it.

(4) Arctic Thunder comes off a strong win in midweek grade and should be hard to beat again, while (7) Majella may improve again third up and has a great record on good ground.

I’m hesitant to dive into (11) Loveplanet after making him my best bet last start, but I really don’t think there’s a great deal to this race. One of his main dangers looks to be (7) Wairere Falls who comes off a dominant win, but it was over 30/1 pop California Longbow and Cognac, who had previously done nothing of note. I think if McDonald gets a cozy run from barrier 2, he’ll be very hard to beat.

(2) Pesto draws the inside and has run 2nd in both starts last prep. First up at the mile with just one trial under the belt is some query but he’s clearly got class.

(4) Re Edit is a chance second up but is a costly horse to trust.

Nothing wrong with the form of (2) Cuban Royale who won two starts ago and then ran 3rd last start despite sitting wide without cover. Drawn awkward again but looks over the odds at $17.

(7) Fastconi won with a similar set up to this two starts back, and the horse she beat by 2L has since come out and won. That was on heavy ground so the firm ground poses a different test, but the inside draw gives her the chance to win again.

(1) Best Stone was plain first up but does drop in grade and can improve.

(8) More Prophets had no luck first up and gets JMac booked today.

(1) Four Moves Ahead is the class runner of the field but the glaring question in her form is whether she’s as good on firm ground. All of her career starts have come on rain-affected ground, so for mine she is short enough at the even-money quote given she still needs to check the good ground box.

(8) Xtremetime looks the value at $19 after two wins from as many starts last prep.

(6) Swift Witness looks the pick of the Waterhouse pair with Clark riding her.

(6) Prime Star has been a trial star leading into today. He sailed down the outside to win his first trial easily and he was strangled to the line in his most recent one. He draws awkwardly but finds a race he can really stamp himself as a decent horse in.

(10) Embracer won first up at Hawkesbury last prep in his first outing as a gelding. Down in the weights he can give some cheek from on the speed.

JMac goes on (2) Viridine which has basically been given a bunch of barrier trials this prep.

(2) Think It Over is my each way selection here with several of these likely to be suited first up at 1400m. This horse went to a new level last preparation, with a first up victory in the Liverpool City Cup, followed later in the prep by victory in the G1 George Ryder Stakes. He has a great first up record with three wins and two 2nds from six starts, he draws to enjoy a lovely run from barrier 2 and at $8.00, he looks an each way bet.

(12) Verry Elleegant won this race last year and was brave in doing so, but that race was run at a fast tempo and it was on soft ground. Whether she will be as suited first up on firm ground this time around is the query, especially as she’s likely going to the Cox Plate and Melbourne Cup.

(3) Cascadian is a tough horse to catch but he did win at Group 1 level last prep, albeit under handicap conditions. He nearly should have won the All Aged over this track and distance at the end of last prep, which was at weight-for-age. Right in this with Bowman aboard.

(5) Imaging is another at big odds that can definitely win without surprising. He’s gone enormous in his past two proper first up runs, the first of those in the Missile Stakes last year, and then the CF Orr Stakes at the start of his next campaign. He almost should have won this race last year, albeit it was second up and on wet ground, but he draws well enough to be a chance.

I’m banking on the fact (8) Written Beauty is the best horse on her way to bigger races. She won first up last prep in workmanlike fashion, but she wasn’t at her best in her two subsequent starts. I don’t think she’s learned to settle yet judging by her trials, but perhaps the stable are just going to let her run fast. She’s zoomed along in her trials and posted big margins, hopefully they let her roll here and she can prove how good she is.

(2) Forbidden Love is a Group 1 winner over 1400m. Maybe this is a bit sharp for her but she’s been trialling well and goes well fresh.

(1) Entriviere has five wins from seven starts and her only start in Australia was a 2nd palcing to Fasika, beaten 0.2L. JMac goes on for the Kiwi connections but the concern has to be the lameness issue during the week.

(3) Tailleur has six wins from nine starts and was last seen starting $3.80 in the G1 The Galaxy.

Plenty of other chances in an open race but hopefully this is Written Beauty showing her class.

(8) Bigboyroy was very brave in defeat first up behind Frosty Rocks, who has since come out and won again. Roy won second up last prep, retains JMac and draws well, so he’s quite clearly the horse to beat.

(1) Poetic Charmer is way over the odds at $17, especially if you consider Bigboyroy is $4.00. Poetic Charmer finished 3rd behind Frosty Rocks and Bigboyroy last start. He got the gun run from barrier 1, but he was only 0.1L behind Roy and he meets him 0.5kg better at the weights. He has three wins from six starts when third up, gets Bowman on and did win over a similar distance here last preparation.

(6) Matowatakpe has won three of his past four and draws for a good run once again so must be included.

(11) Atishu has won her past four in New Zealand and makes her stable debut for Chris Waller today. Wouldn’t surprise me if she was well backed and won.

Throw in (14) Handspun who is ready third up now.