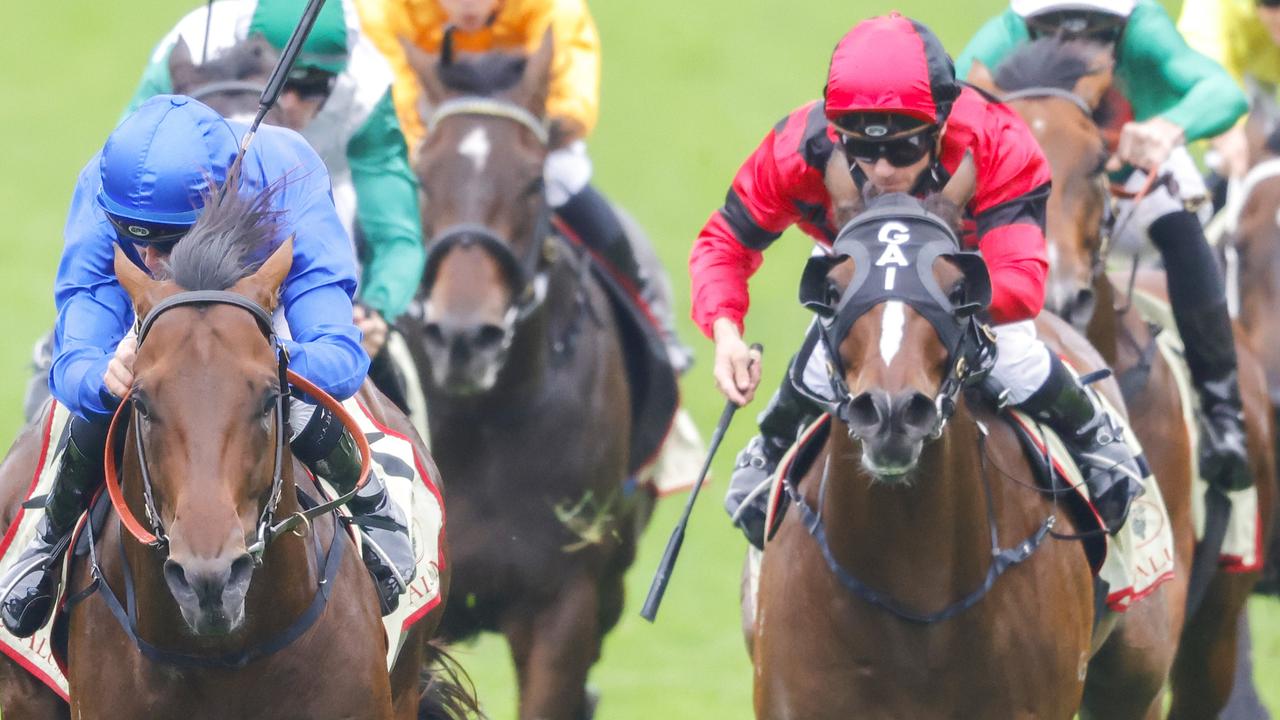 It’s one of the biggest days on the Australian racing calendar at Rosehill on Saturday afternoon, with FIVE Group 1s on the 10-race card!

The headline race is the Golden Slipper Stakes – the richest two-year-old race on turf – which is supported by the Ranvet Stakes, George Ryder Stakes, Rosehill Guineas and The Galaxy.

(8) Icecrusher is due after a couple of unlucky runs. She went close first up in a mares BM72 race at Warwick Farm, then was held up the entire straight in a similar race to this at Randwick, before sitting wide throughout last start in another Midway over the mile. McEvoy is replaced by Nash Rawiller today from a good draw and he once again looks a good each way play.

(2) Highly Desired resumed with a strong first up win and he’s won up to 1600m so should handle the rise in trip today. The booking of Tim Clark makes sense given his frontrunning style.

(4) Mazu has returned a new horse with the gelding operation this preparation. He’s won both starts including a convincing victory in the Fireball Stakes last start. Draws the inside here and would only need to hold form to win again.

His short quote does open up a bit of value in the race for those keen to oppose him. (5) Bacchanalia has only placed once from four starts when first up from a spell, but he’s undefeated from four starts on rain-affected ground. Interesting to see if the conditions bring about a better first up performance.

(9) Minsk Moment was only ordinary first up in the Fireball but was taken to the back of the small field. Better draw should mean a more positive ride today and JMac jumps aboard for Waller. Expect sharp improvement.

(14) Smirnova is the real X-factor in the race. We just don’t know quite how good she is. She won her first three starts before resuming in a 955m race at Moonee Valley, where she deadest went to the line under triple wraps. Should have won easily so I’m intrigued about how she measures up here.

(13) Surefire made a huge impression on his Australian debut, winning over 2000m on the Heavy 10 in his first run since June. He won three of his five starts in the UK and has won up to 2400m, so theoretically he should improve up in trip today and with that run under the belt. If he does, that makes him awfully hard to beat here with just 53kg on his back.

(2) Knight’s Order is an each way chance second up. He ran 3rd first up which was the first time he’s ever finished in the money from six starts fresh. He’s got two wins when second up from a spell so should improve and that makes him a solid shout. Improving track helps him.

(5) Zeyrek was sound first up and dominant in victory last start. Has a good record at the distance and should get a similar run to last start.

(1) Le Lude was sound first up in the Millie Fox and she justified heavy support in betting when bolting in to win the Aspiration Quality last start. That was her first win when second up from a spell so I’m less worried about her poor third up record. A repeat of last start would see her win this.

(5) Nerve Not Verve led all the way to win at Moonee Valley last start. That sort of race has been used as a lead up race for this with success in the past.

Disappointing field for the Group 1 Ranvet Stakes with a field of six set to go around.

(5) Verry Elleegant bounced back with victory in the Chipping Norton Stakes last start. This is an easier field than she beat there and she should be just about at her very peak now third up from a spell. She’s had seven starts at this stage of her preparation for five wins and a 2nd placing.

(6) Montefilia looks the likely danger. She also comes out of the Chipping Norton Stakes, where she didn’t get much luck. She drawn an inside gate and will need luck again but if she’s giving Verry Elleegant a headstart she will find it tough to run her down.

The Rosehill Guineas looks a great opportunity for (1) Anamoe to atone for his defeat in the Randwick Guineas last time out. There’s a few key positives he gets in his favour which should allow him to turn the tables on (2) Converge.

Converge drew an ideal gate and was given a perfect ride by Tim Clark in the Randwick Guineas, and he was able to steal a good march on Anamoe before fending him off to score by a head. That race was over the mile and they meet again here stepping up to 2000m. They’ve drawn right next to each other with Converge in 8 and Anamoe in 9, which I think suits Anamoe as Converge won’t be able to enjoy a perfect run like he did last start. Converge in unproven over 2000m whereas Anamoe’s only start at the distance was his super effort in the Cox Plate.

Thinking the improving track should also be a positive for Anamoe, so with all that in mind I make him quite clearly the horse to beat.

(3) Profondo obviously is the X-factor in the race. He was well-beaten first up in Melbourne, but gets the services of Hugh Bowman for the first time and returns to the Sydney way of going which should bring sharp improvement. He’s a serious colt and he’s already a Group 1 winner at this distance.

Going to give (8) Colette one more opportunity here after backing her in the Chipping Norton last start when she failed. Worth noting she started $3.60 against Verry Elleegant on that occasion. JMac jumps aboard today and it was at this stage last prep that she started winning.

(12) Hilal adds a very intriguing angle to this race as the sole three-year-old. He avoids going to the Randwick Guineas and instead stays around the mile to take on the older horses. Two starts ago he was beaten 0.2L by Anamoe and I dare say if Anamoe was in this race he’d be pretty close to favourite.

(9) Forbidden Love bolted in to win the Guy Walter Stakes and backed up a week later to win the Canterbury Stakes easily. The horse she beat then came out and won the Coolmore Classic. Hard to beat again.

(6) Bankers Choice can definitely be thrown in to numbers at double figure odds. His first run in Australia was very good in the Blamey Stakes, recording some of the fastest splits of the meeting. His final start in New Zealand, he beat Coventina Bay who has since won two Group 1s.

(3) Private Eye and even (7) Laws Of Indices not hopeless.

The Golden Slipper looks to be a wide-open affair this year with cases able to be made for several runners. I’ll be trying to keep it simple and stick with three horses that immediately appealed.

(2) Sejardan hasn’t done much wrong at all in his four career starts. He’s won three of them and ran 3rd in the Inglis Millennium when sitting four-wide the trip. He bounced out of that race to win the Todman which is a reliable lead in to the Slipper. Comes up with an ideal draw in barrier 7 and he is adept in all conditions, having won on good tracks and heavy. Think he represents value.

(8) Coolangatta will be very popular and she’s another that hasn’t done anything wrong, winning all three career starts. She was last seen winning the Magic Millions 2YO Classic on the Gold Coast and hasn’t run since, which is an unconventional prep for the Slipper. She jumped out very well at Newcastle leading into this.

If you like Coolangatta, you have to make a case for (10) Russian Conquest who ran 2nd to her on the Gold Coast in the Magic Millions, beaten a nose. She didn’t handle the heavy track last start in the Reisling Stakes. We often see horses that are beaten in the Todman or the Reisling able to make amends in the Slipper and at $16, she’s a bet.

Three for me in The Galaxy as well, which shapes as another wide-open race.

(8) Isotope is ready to win a Group 1 now. She overcame plenty of issues to return with victory on the Gold Coast two months ago. She’s clearly got outstanding ability and she’s undefeated from three starts on soft ground so she will get her chance to win her maiden Group 1 here. She beat Away Game on the Gold Coast, who then ran 2nd to Marabi and who she meets again today.

(1) Big Parade carries top weight which does make it hard but he’s got a terrific first up record and is deadly on rain-affected ground. Blinkers on first up is an obvious signal of intent and at double figure odds I’ll be having something on.

(10) Minhaaj is another at big odds that I’ll be backing. She ran first up in the Oakleigh Plate but was checked early in the race and really had no hope thereafter. Blinkers go on again and we’ve seen horses come out of the Oakleigh Plate to win this race multiple times in recent years.

Complete lottery to end the card here with any number of winning chances.

(6) Samoot made a big impression on her Australian debut, winning by 3L after settling near the back of the field at Canterbury. She draws wide here so will be back near the rear again but there was plenty to like about that win and she looks a lightly-raced European import that can go through the grades in Australia.

(9) Mallory gets Pike on today after running 2nd to Mazu in the Fireball Stakes last start. Mazu is a short-priced favourite earlier on the card and looks a fairly smart horse so that form line appeals.

(1) Steinem is an interesting inclusion here with JMac booked to ride for Maher and Eustace.