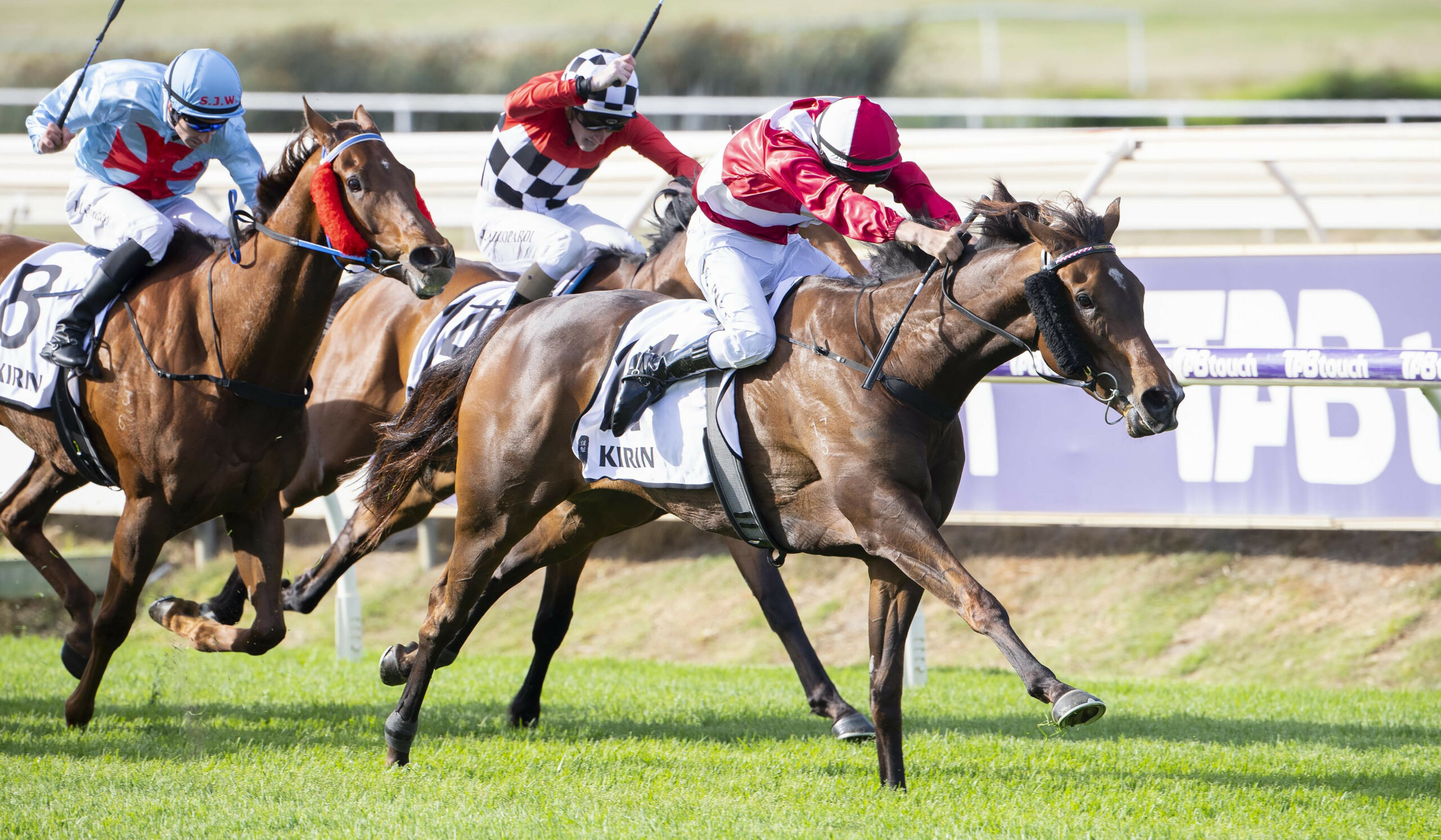 The first week of the TABtouch Masters carnival at Ascot is headlined by the Group 1 Railway Stakes – WA’s premier mile race.

We have a full field of 16 for the feature, which is supported by the G2 WA Guineas and three Listed races.

Perth local Tim Geers has previewed all 10 races on Saturday’s card, with his best bet coming up in the last.

The track is rated a Good 4 with the rail out 3m for the entire circuit. Expect those on speed to be favoured early.

Find our Ascot racing tips for Railway Stakes day below!

Makes it an interesting contest with the weight turnaround, but Pure Devotion is probably just a better horse.

(2) Black Shadow should be ready to show something now third up and up to 2200m.

(4) Left The Building has only trialled once leading into his debut today but he was very impressive in that showing, coming from last to charge home over the top and win easily. Likely to be near the back of the small field again and the only query would be if they are able to make ground early in the day, but he looks to have plenty of talent.

(6) Revitup won well on debut, beating Snowdome who then ran 2nd again at its next start. Led throughout and will look to do the same here.

(2) Man Crush was OK on debut in an unsuitable race shape and was scratched from Wednesday to run here instead.

Not overly keen to get involved here.

Competitive race this over the 1800m.

(1) Brave Angel looks well placed third up dropping out of a 66+ race back to a Graduation Handicap. Was a Listed winner over this distance last prep and despite having to carry weight here, looks the horse to beat.

Think we’ll see good improvement from (3) Olden, who was racing really well before striking a soft track last start. Has never won from seven starts on rain-affected ground and dropped out to finish last in the small field. Can feature at huge odds.

(6) Jarman is flying, with a win in Kalgoorlie followed by back-to-back placings in this company. Can go well again.

(10) My Squeeze Louise was ordinary first up but improved out of sight last start when the money was there to suggest it would do so. Steps up from a Class 1 to a Graduation Handicap though.

Not sure how well he’s going but (11) Eurasia is an outside chance here at huge odds. He’s only been fair in two starts back from a spell but he didn’t get the race run to suit last start. He went forward and found a good spot but as soon as that happened, something took off around the outside and set the race up for the backmarkers. He gets up to the mile third up with a great draw and he’s placed in all five starts at the track and distance. May well be past his best but he’s an each way chance.

(5) Big Screen is flying, with five top-two finishes from six starts this preparation. Steps up to a 66+ race today which is harder than what he’s been contesting but he’ll lead from barrier 1 and take catching.

(3) Proconsent ran home strongly over 1500m last start with Pike aboard and he sticks as they step up to the mile today. Has to carry the full 60kg though.

(2) Ginger Flyer has run in the top two in all six starts this prep. The mile might just see her out on the quick back-up but she’ll make her own luck on speed.

(7) Miss Marietta hasn’t had any luck in her past two starts and is a knockout chance.

The first of the feature races is the Listed Placid Ark Stakes for the three-year-olds.

I give (2) Ain’t No Other Man a chance in this second up from a spell after a good first up run behind The Front Bar, who has since come out and won again. Draws well and is each way odds.

(5) Thomas Magnum is an interesting inclusion here. He’s also nominated for a Class 1 at Belmont on Sunday, where he would be a complete moral, but they obviously have a high opinion of him.

(6) Flying Missile never runs a bad race and comes out of the Belgravia and Burgess Queen Stakes. That form continues to stand up through the likes of Searchin’ Roc’s and It’sarayday so she’ll be hard to beat in this.

(11) Sparkling Blue is undefeated from two starts and has been impressive in both. Some query with Astrape failing to fire midweek and the draw here doesn’t help, but she’s a good filly.

We’ve got a lot of horses out of form and dropping in class here but the new kid on the block is (9) The Spruiker who dominated the winter with five wins from as many starts. What he comes up against here is no doubt much harder than what he ran against last prep but we don’t quite know just how good he is. He’s trialled twice leading into today but without the blinkers, which go on for race day.

(10) Hot Zed sat three-wide the trip behind Wilchino last week and comes here on the quick back-up with a good draw.

(5) Royal Command has done absolutely zilch in her first two starts back from a spell but no surprise if we see a sharp form turnaround.

(13) Treasured Star was a horror watch for her backers in the Burgess Queen Stakes last start. Pike ended up well back and tried to ride for luck which never came and she ended up running straight up backsides the length of the straight. Drawn well here in 6, they put the blinkers on for the first time and it’s worth noting she started $2.40 against the likes of Buzzoom and Searchin’ Roc’s.

(2) It’sarayday hasn’t done anything wrong, coming off a good win in the Fairetha Stakes. Prior to that he was luckless behind Searchin’ Roc’s, which is a form line that’s stood up. Draws the inside here, the mile is some query but he’ll get his chance.

(10) Buzzoom won three straight before Searchin’ Roc’s was able to turn the tables in the Champion Fillies Stakes. Drawn awkwardly in barrier 11 and will need a super ride.

(1) Ex Sport Man is much better suited back to set weights and up to the mile third up, but the jury is well and truly out.

(5) He’s A Lucky Lad another to include at big odds.

It looks a procession for (16) Western Empire who was arrogant in his return to racing in the G3 Asian Beau Stakes. He went into that with a small setback and was first up off a Derby win over 2400m so it was some training effort, and it’s scary to think of what could happen if he’s improved. Drawn ideally, can settle handy and looks close to a good thing. I could see him starting closer to $1.60.

(12) Notorious One has so much ability but does plenty wrong in his races. He did well to run 2nd behind Western Empire in the Asian Beau and could have finished closer with a bit more luck early in the straight.

(10) Kissonallforcheeks was unsuited in the Asian beau when forced to lead and she did start $2.15 against Western Empire that day. She was much better ridden cold in the RJ Peters last week, showing a good turn of foot when the gap eventually came. She’s not hopeless in this on the quick back-up.

(6) Comfort Me and (14) Son Of Bacchus are both blowout chances that can be included in trifectas and first fours.

Good race the Jungle Mist and I’m keen to back a few.

(11) Angelic Miss was a big run in defeat last start when coming from the back of the field to be beaten just over a length. She drew barrier 15 that day but comes up with barrier 1 here. Has a great record at this track and distance and will be very hard to beat.

(6) Sheza Chalmer is value at $9.00 despite drawing wide in barrier 11. Her first up run behind Wilchino and Triple Missile was very good, and I like that they’ve given her five weeks between runs given that race was run at a very fast tempo. She will relish the rise in trip today and I have a very high opinion of her.

(4) Chantorque is much better placed today. She carried 60kg from barrier 12 first up over 1200m with no trial leading in. Now drops to 56.5kg, draws ideally in barrier 4 and should improve significantly off that run. No surprise to see market support for her. Go back a couple of preps and she was running 4th behind Kissonallforcheeks and Western Empire.

(3) Solaia an interesting inclusion first up from injury. Recent trial was good.

Keen to stick with (11) God Has Chosen who was meant to go around last week but was scratched due to a foot abscess. That’s not ideal given he lines up a week later but I reckon he’s a very good horse in the making. He was a certainty beat first up at Northam and then atoned for that with a dominant win last start when Pike took over. The horse he beat then came out and won her next start easily. He’s drawn a tricky gate here as he does tend to get back but banking on Pike to get the job done.

(14) Vadette De Star has been backed into $8.50 from $13, which was a silly price. She was good first up behind Triple Missile and good again last start when running the fastest final 400m of the meeting. She got a long way back there and will do so again from the horror draw, but if she gets a tag into the race, look for her late.

(12) Mercanto has won back-to-back races this preparation and now steps up in class. Stable is flying but he does get a tricky draw too.

Interested to see how (13) Tri For Us returns first up from an Oaks campaign.