It’s Magic Millions day at the Gold Coast and Trent Crebbin has previewed every race on the huge card. 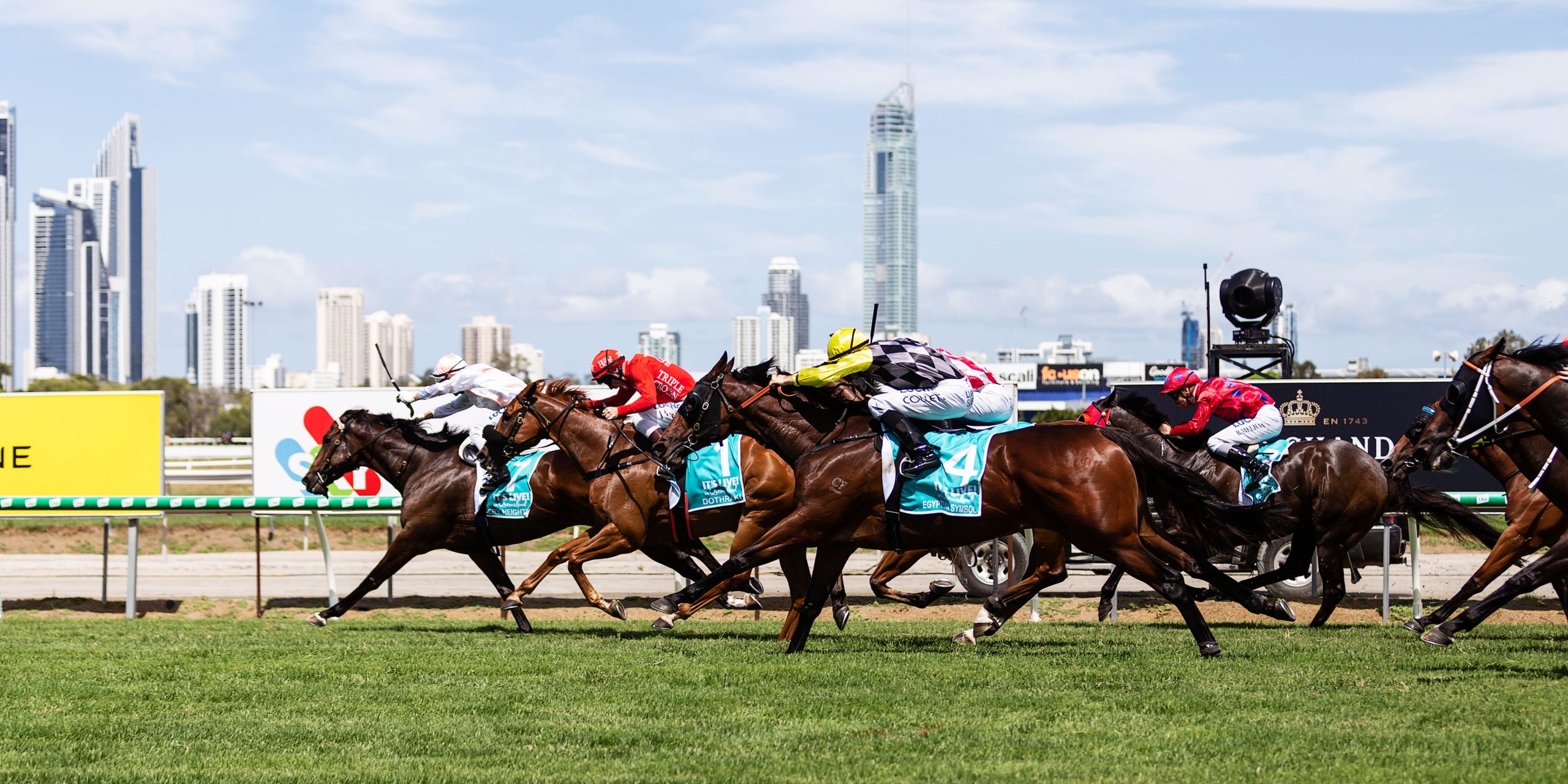 Quality throughout the nine race card, headlined by the 2yo MM Classic.

Trent Crebbin has ventured to the sunshine state and has previewed every race.

Huge field for the maiden and not much would shock. (5) Heir Apparent was well beaten by the handy Duchy Of Savoy in Melbourne last start. He draws very wide but gets Nash on and it’ll be interesting to see if he can measure up.

(1) Ambitious Spirit might be able to find cover midfield and looks well placed. His run as favourite last start at this T/D was good.

(6) Devil’s Throat gets Jmac on but is another that draws very wide. Some of his NSW maiden form last prep reads well for this, notably a 2.2L 4th to Brigantine.

(9) Warmth has trialled well and her start before a spell when 2nd to Lady Of Luxury is good enough to win this. She should get every chance.

Huge field with form from everywhere- there are better races to bet into later.

(2) Wheelhouse looks the one to beat again on the backup out of The Wave where he really surged late to get up on the line. He meets a couple slightly worse at the weights but gets Berry on and draws well. He’s short enough though.

(6) Dzsenifer was the one run down very late by Wheelhouse last time out. She meets him 1kg better at the weights and given her consistency, another top 3 finish is expected.

(3) Love Tap was a touch disappointing last start in The Wave, leading them up but fading late. He meets the winner 2.5kg better and was 1400-1800 so perhaps lacking a platform. Drawn 1, he should lead again here.

(1) Reloaded doesn’t win many but interesting to note Jmac rides him over Bigboyroy. He comes out of a strong race behind Kubrick and The Harrovian, hitting the line well from too far back. Effectively 3rd up now, 1800m is ideal and the different form might be the right form. Have to go each way given his record.

(1) Parry Sound has to carry the weight but it looks deserved given the class of race he’s coming out of. He was too strong at the end of 2000m in the Summer Cup last start and is even better suited at 2400m. He’s got a strong 4th up record, Jmac hops on and he’ll be strong late in a race that looks to have genuine tempo.

(2) Wapiti is hard to knock given his consistency. He’ll give himself every chance just behind the leaders, the query is 2400m. He had absolutely every chance two back over 2200m and didn’t exactly attack the line. I’d prefer him at 2000m and this is a harder race.

(4) Navy Cross can improve 3rd up out to 2400m on a dry track. Forgive last start on a heavy, he’ll roll forward but will cop a bit of pressure.

(3) Fun Fact would be hard to beat at his best but looks a bit in the wilderness. Up to 2400m now, he’s one of the other main speed influences.

Open race for the fillies and mares. I thought (6) Incredulous Dream might be a touch of value. Whether she’s quite up to this class is the question, but she’s undefeated when 3rd up from a spell and did win a listed race in Adelaide this stage last prep. The extra 100m suits, a dry track suits, Berry sticks and the recent trial in between runs was good. The draw isn’t ideal but she’s ready to peak.

(7) Snapdancer just peaked late first up when overrun by Special Reward. She’s got a very strong 2nd up record and was only beaten 0.5L in this race last year when covering a bit of ground. She’s had a good trial since and Jmac jumps on.

(1) Krone won this last year, diving through on the inside. She hit the line nicely first up and has no doubt been aimed at this. She has to carry the full penalty as a group 1 winner but has the class to win again.

(3) Kiku only found Kementari better last start and she’s another with a very strong 2nd up record with 2 wins and 2 thirds from 4 starts. My small query with her is she may be looking for further, dropping 50m in trip when she’s better suited up to a mile.

Thinking the mares have a stranglehold on this race. (6) Away Game was excellent first up, flying home in a very fast race behind Marabi, who I’d back in this race any day. She races well 2nd up, loves the Gold Coast having won the 2yo classic at this T/D and placing in the 3yo guineas at 1400m. She can land close from the inside barrier and Jmac jumps on.

(14) Isotope is a very classy mare who produced a huge win one day at Doomben to run down Away Game, who was first up. She started clear favourite in the 3yo guineas and was travelling well before clipping heels and falling. She probably should’ve beaten subsequent group 1 winner Wild Ruler before a spell and will be flying home.

(7) Fituese has an outstanding first up record (5:4-0-0), the only miss coming last prep on a soft 7 track which she doesn’t really handle. She did win fresh off about 9 weeks (with trials in between) in a big win at Randwick, before running 2nd to Entriviere which reads well.

Include (8) Scallopini in exotics. Doubt he’s quite up to these but he didn’t really fire last prep and has a very good fresh record.

Very tough to split Away Game and Isotope, but with the run under her belt behind potential star Marabi I’m just siding with the former. Something on Fituese each way as well.

Always like this race- it’s open as usual. (3) Beau Rossa has been dealt a shocking draw but it’s hard to ignore his last prep. 2nd up last prep (off 9 weeks) he did beat home Behemoth before losing the race on protest. That horse is a multiple group 1 winner, and he arguably should’ve beaten him the next start in the group 1 Memsie when held up. I thought he ran well with 60kg first up chasing the tearaway leader Zoutsyle and the recent tickover trial was good.

(2) Apache Chase drifted heavily once the rain came last start and ran well considering he’s lengths better on a firm track. If this was at Eagle Farm he’d be the one to beat, but even still he’s run very well away from his home deck. The Golden Eagle 4th was good and his only run at the T/D was a solid 4th in the 3yo guineas. There’s a long run to the first bend at the 1400m start so the wide draw shouldn’t be too much of an issue.

(4) Eleven Eleven won this race last year but was in better form coming off two straight wins and I’d argue this is a harder race. He maps well midfield from barrier 5 and does love racing here.

(1) Kementari relished the wet track to drive through and score last start. He meets Apache Chase 1.5kg worse at the weights now but if Nash can weave through the gaps and expose him late, he’ll acquit himself very well.

(7) Nudge next best, I’ve never been able to catch her and do think 1600m is her go, but she’ll get a strong tempo and Jmac can find the running line from barrier 12.

The 2yo feature of the day. No doubt (9) Coolangatta is the one to beat. The Gimcrack win on debut was outstanding off an average tempo, ripping home in some very strong figures. She was far too good first up at Doomben, importantly over 1200m sitting on a good tempo. Even money looks about right and if Jmac can push forward and slot in behind the speed, she’ll be very hard to beat.

(11) Russian Conquest is a strong danger. I really liked her win last start over 1100m, travelling beautifully into it and winning with ease. 1200m will be no issue whatsoever and she draws for a very soft run behind the speed. At the prices I’d rather be with her on a 1×3 basis.

(12) Miss Helfire is in the mix for a top 4 spot having pulled away late last start to win in okay fashion. Don’t think that’s the A-grade form but she hasn’t done much wrong.

(16) Bright Blue Sky will be charging late down the outside. She was a bit one paced at her Aus debut but can improve off that.

Looks a fairly simple two bet play for me in the guineas. (3) King Of Sparta on top. I liked his first up run on an improving soft track, just peaking on his run late but doing well from the back to get within a length of Bacchanalia. The form towards the end of last prep around Home Affairs and Paulele reads very well for this, and a dry track is ideal. Nash just needs to get on the back of the right one.

(2) Jamaea has trialled very well for this first up run. She acquitted herself well in the Golden Rose before a spell, only beaten 4L by Anamoe which is obviously the best form around. Small query at 1400m first up and she does have to carry the 56kg as a filly, but the most recent trial was excellent under little riding.

(14) Indiscreetly could hardly have been more impressive last start at 1600m, winning by 6.3L after leading all of the way. She’s rock hard fit and dropping back to 1400m should run these along in the big field.

(8) I Am Lethal looked good winning a bm72 last start in NSW but will need a good ride from a very wide barrier.

Always find this race quite tough. (4) Miami Fleiss had a tough run last start and was entitled to tire. She was far too good at this T/D at $1.50 last year and with even luck from the wide gate is probably the one to beat.

(7) Ef Troop is incredibly hard to catch but at her best she’d give this a shake. The trial wasn’t bad, but 1300m first up is an interesting move.

(2) Chapter And Verse might find this a bit easier, but he doesn’t help himself with his racing pattern.

(1) The Odyssey won this race last year and actually gets in 1kg lighter. He maps well for Brad Stewart just off the speed.