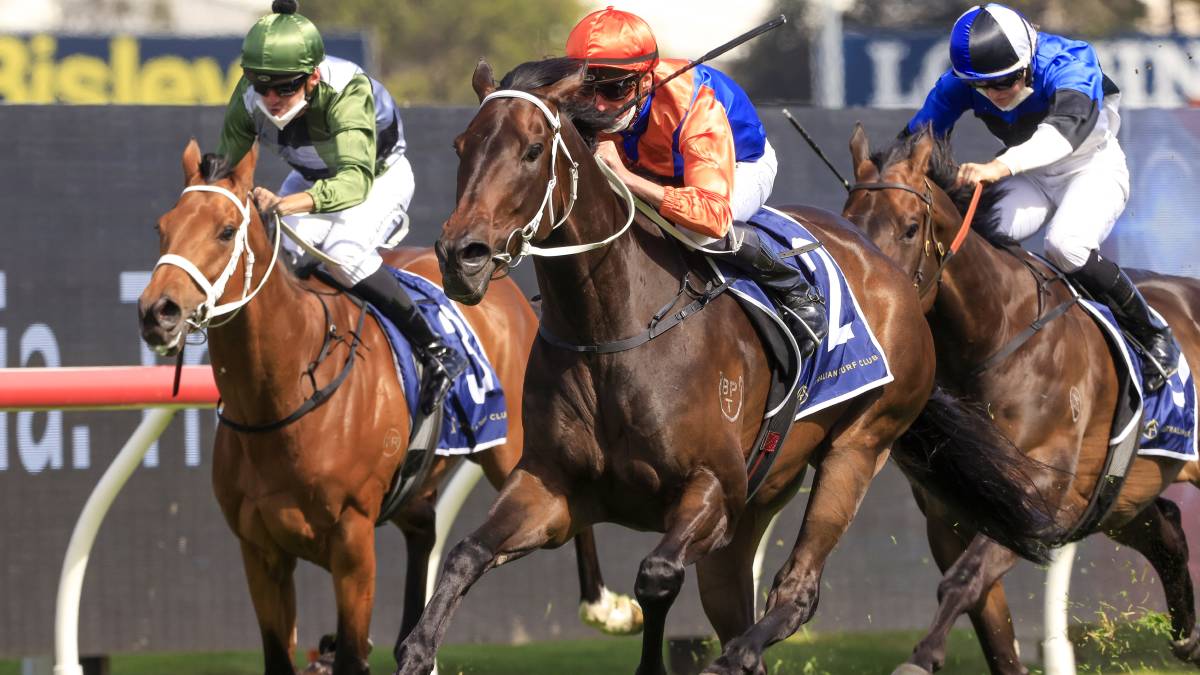 Group 1 racing continues in Sydney this weekend with the Tancred Stakes and Vinery Stud Stakes headlining the 10-race card at Rosehill.

The track is once again rated in the Heavy range and the rail is out 5m from the 1400m-W/Post and 4m the remainder.

Tim Geers has previewed every race below with his tips and best bets.

His best bet comes up in the Tancred Stakes and his best value bets go around in Race 4.

Find his Rosehill racing tips below!

Nathan Doyle holds a strong hand here in the Midway to kick off the card.

(9) Dalaalaat was a big run first up from a wide draw in a very similar race to this. Beaten 2L but gave them a big headstart. Draws wide again today but gets JMac on and wouldn’t have to improve a whole lot to win this. Does look short enough given these races can often be a lottery.

(10) Strawb is the stablemate and has a dynamite first up record with four wins from six starts. Has won in all conditions, gets Pike on and has had the three trials in preparation for this. Looks an appealing each way price.

(8) Two Up ran well in a harder race two starts back at Canterbury and was beaten less than a length in the same race as Dalaalaat last start. Will go close again.

(2) Boyfriend comes into this off a 2nd placing to Sejardan in the Todman Stakes. Sejardan had a torrid time of things in the Golden Slipper but I still think that form reference is solid. Blinkers go on for the first time and he should be right in the finish with any sort of luck from the gate.

(3) Williamsburg is the stablemate and comes through the Pago Pag, where he ran 4th. Draws a good gate in barrier 6 and Gerald Ryan gave a good push for him as well as Boyfriend.

(7) Standing Order didn’t have any luck in the Black Opal last start but was good behind Williamsburg on debut. Has a dreadful gate to overcome but is value at blowout odds.

(9) Bessmati comes through the Sires’ Produce at Flemington and JMac is booked for Annabel Neasham. That race has proven a reliable form reference for this race with the past two winners of the Baillieu coming through the Sires’. Big odds.

Keen to spread my bets over a few at good odds here.

(1) Yonkers drops out of the Group 1 Australian Cup, where he wasn’t disgraced, back to a group 3 here. Prior to that ran within half-a-length of Cascadian which is good enough form to win this. JMac on, has won on all surfaces and with three runs under the belt he’s ready to win.

(11) Alakahan is worth including at monster odds. Ran midfield first up in the Canberra Cup but he’s never placed from five starts when first up. He does have three 2nd placings from four starts when second up though, and he’s got three top-two results from as many starts on rain-affected ground.

(4) Mount Popa hasn’t won in a year but is certainly knocking on the door.

Having something on the two Murray Baker & Andrew Forsman runners here, which make the journey over from New Zealand. This stable have a good record in this race, bringing runners over after competing in the New Zealand Derby.

(1) Regal Lion ran 3rd in the Derby three weeks ago and drops back to the 2000m of the Tulloch. Heavy ground a slight query but has won on soft previously. Need a good ride from Nash Rawiller from the wide gate.

(2) White Noise ran 7th in the Derby and 4th in the Guineas prior to that. Has two wins on soft ground and gets Jamie Kah on from a good draw. As mentioned, the stable have had success doing this in the past, winning this race with Quick Thinker and Jon Snow who had the same lead ups.

Something small on both at each way odds.

Going to stick with the Coolmore Classic as the form line to follow here. I was keen on (5) Expat that day and I’ll stick with her back to Group 2 company today. She’s got a terrific record on rain-affected ground and if she can find the front and get a soft sectional she may prove hard to beat at each way odds.

(4) Vangelic also comes through the Coolmore and she’s now third up from a spell. There’s no doubt she needs to improve to win but I wouldn’t put it past this stable to be able to have her back to her best here. She’s big odds.

(3) Nimalee won this race last year and was sound first up in the Newcastle Newmarket. Has a good second up record and has never missed the top two from four starts at the distance.

(7) Annavisto bolted in first up in Melbourne in the Tressady Stakes. Never faced a heavy track before but does have four wins on soft ground.

(10) Promise of Success is knocking on the door.

I really think (5) Imaging is a super each way bet here at $6. We’ve seen Chris Waller win this race with Mister Sea Wolf first up before, coincidentally in the same colours as Imaging, and he’s followed a very similar path here this time around. This horse has always showed plenty of ability – he was luckless first up in a G1 Orr Stakes. Won at the track and distance previously, has a good fresh record and goes well in rain-affect conditions. Think he’s a great bet.

(11) Our Playboy was sound firs tup at Flemington and loves wet ground. That’s the key to him so given he ran well first up on firm ground, suggests he’s returned in good order. Gets in with no weight.

(14) Mr Mozart won the Phar Lap Stakes last start and tackles this as a three-year-old. Have to go back to 2004 to find the last three-year-old to win this race!

The top three in betting all come through the G1 Australian Cup at Flemington last start.

(2) Spanish Mission led them up on that occasion and plenty was made of JMac going too fast in front, which set the race up for those coming from back in the field. The obvious query here is the heavy track as he’s never run on it before, but he’s primed now third up and stepping up to 2400m. Think he can turn the tables on the two that beat him home last start, both of which are queries on the ground too.

(11) Duais was the winner of the Australian Cup and although she’s yet to place in three starts on heavy ground, she didn’t get much luck in the Chipping Norton on the Heavy 10 two starts ago. She is obviously hard to beat on her last-start win but she’s short enough considering the surface.

(1) Think It Over very rarely runs a poor race, if ever, but he’s quite clearly a better horse on firmer footing. He’ll run well again but whether he’s good enough to win on the bog track is the issue.

(7) Sheraz is definitely one to include at $31. He’s been good in two starts back from a spell and is ready to strike now third up. He’s got good form on wet ground and he’s only ever won beyond 2200m – he reaches the right trip at the right time now.

(10) She’s Ideel back on heavy ground another that can improve sharply on her showing in the Australian Cup.

Plenty of different angles to consider here and I’ll be opposing the current favourite which is (2) Hinged.

Backing her two stablemates instead, those being (4) Fangirl and (7) Pretty Amazing. Fangirl went around $1.75 in the Phar Lap Stakes last start and failed. The jury is well and truly out for her but Chris Waller wouldn’t be running her here if he wasn’t confident she could turn it around. Respect her last start SP – that race has proven a good lead up for this in year’s gone by.

Pretty Amazing has three wins from four career starts after another impressive display in the G3 Kembla Grange Classic, run at Goulburn last start. That’s another race that has proven a good reference leading into this race and JMac takes the ride. She gets through the ground and looks a good price.

The Queenslander (6) Gypsy Goddess is a terrifying prospect, undefeated from five starts. Hard to know how that form will line up here as this is a very steep rise in class, but she can hardly have been more impressive to date.

(3) Never Been Kissed can be included.

A race I’m more than happy to stay out of, this one.

(18) Maotai resumed with a good win at Randwick and the form has been franked through Rustic Steel. His recent trial here at Rosehill was unbelievable. He’ll jump to the front and prove awfully hard to run down.

(13) Gravina won well first up, beating Taksu who then won its next start. Gravina then bumped into Shelby SixtySix who came out and won a Group 1 last weekend, so the form obviously looks very strong. Loves wet ground this horse so has to go close.

I’d be surprised if the winner came outside of (7) Rustic Steel and (8) Taksu here. Rustic Steel bumped into Maotai first up and then bolted in to win the Provincial Midway Championships heat at Newcastle last start. Bowman sticks from a good draw and he obviously goes well on wet ground.

Taksu bumped into Gravina first up and then belted his opposition last start here at Rosehill over 1350m. The 1400m will be no issue and he’s another that relishes the heavy ground. Draws the inside so expect him to jump and run once again. Will be a fascinating battle with Rustic Steel trying to chase him down.