Connect with us
Gold Coast (9 Races)

The Group 1 Winterbottom Stakes headlines week two of the Perth Masters Carnival at Ascot and Tim Geers previews the chances of every runner. The Group 1 Winterbottom Stakes headlines week two of the Perth Masters Carnival at Ascot, with a capacity field of 16 set to line up over 1200m for the $1million prize.

It’s by no means a vintage edition of the West’s feature sprint, however we do have some of the land’s up-and-comers taking on one of the country’s more established elite sprinters.

The rail moves out to the 5m position after being in the 3m position last weekend, and the track should be a Good 4 with fine weather predicted.

There’s been an important scratching from the race in the form of Carocapo, who was a noted frontrunner, however he’s not as quick as the emergency which comes into the race, (17) Condor Heroes. He’ll go to the front and burn them along, so expect this to be run pretty hard.

That probably spells bad news for the likes of (12) Indian Pacific, who will also be looking to be right up on speed. (3) Malibu Style and (4) Valour Road will push forward, (5) Durendal will hold a spot from the inside gate, and (10) Laverrod is likely to slide forward from his wide draw.

(7) Red Can Man is always handy but the early tempo here will be much more brutal compared to what he faced in last week’s Railway Stakes. (6) Vital Silver can settle midfield and so can (2) Rock Magic, (16) Celebrity Queen could attempt to settle closer, while the map looks a touch tricky for (11) Mankind and (13) Elite Street.

(8) Stageman could be ridden more aggressively so long as he jumps well, but that’s been an issue this prep. (1) Trekking should slot in three-wide with cover from barrier 11, somewhere worse than midfield. (14) Flirtini has to go back from her draw and (15) Essential Spice will be there with her.

Expect this to be run hard.

I’ve been saying it for weeks but I really think if Trekking turns up, this is all over. The last five winners of this race have all come out of elite G1 sprint races from over East, and he’s the only one in this year’s field that can boast that. He ran 2nd to Pippie first up in the Moir, ran 4th to Classique Legend in the Everest, and then ran 2nd to Hey Doc in the Manikato last time out. Hey Doc is a decent reference given he won this race easily last year. Trekking actually started $2.90 in this race last year, and this year’s edition is much weaker. Pike is booked to ride which is an enormous bonus, and he looked very comfortable in a trial on Monday. He’s drawn slightly awkward in barrier 11 but the last eight winners of this race have started from barriers 13, 13, 7, 8, 8, 10, 8 and 9, so he’s actually in the right sort of area. Condor Heroes comes into the race so this will be run quick, which hopefully sets it up for him coming from off the speed. Very keen.

Ran well first up and then was OK without being eye-catching last start. He ran 3rd in this race last year at the same stage of his preparation, so with blinkers going on again and an inside draw, he’s not hopeless to run a place, but he’s an 11YO now and a win looks a bridge too far.

Has been well-beaten in both starts this prep, though he did sit wide throughout last start on an unsuitable bog track. His third up record is very good with three wins and six placings from 11 starts, but he would really have to improve out of sight to figure.

Got away with a win two starts ago in the Prince Of Wales Stakes over 1000m but failed last time out in the Colonel Reeves on heavy ground. Getting back onto the firmer track will help and so does the soft draw, but I think he’s a level below the best of these.

Hasn’t won since this time in 2018 and has only placed in one of his past 10 starts. He does get up to his pet distance of 1200m but he’s not good enough.

This is the smokey in the field. His best form would make him very hard to beat in this race but he just hasn’t been able to find it this prep. He ran a huge race first up with 62kg, beaten half-a-length by horses he was giving plenty of weight to. Second up he started favourite but maybe just didn’t appreciate the soft track, and then last start he sat three-wide the trip and was only beaten 2.3L. He has a great record at the track, he ran 2nd in this race last year, and if he were to bring his best, he’d be right in the finish at $18.

Interesting prep for Red Can Man, who ran 4th in last weekend’s G1 Railway Stakes and now drops back from 1600m to 1200m on the quick backup to tackle the Winterbottom. That screams of afterthought. I reckon the 1400m is potentially his best distance, as he had every conceivable chance and was just a touch weak late. The tempo of this race is going to be very different to what he’s been running in. A brutally-run 1200m is much different to a mile race, so it really wouldn’t surprise me to see him settle further back today, but he does normally show good speed. He can run an honest race like he always does, but I don’t see him winning at 1200m after racing over the mile last week.

He’s just cost himself time and again this prep with his poor barrier manners, resulting in him continually stepping away slowly. He’s got a big finish on him but he just leaves himself with too much to do. His record at the distance is very good and if he can step away cleanly and put himself into the race, I’m sure he will be right in the finish.

Very well backed last week but was ultimately a bit disappointing. There was plenty of commentary about the ride but I thought the horse had his chance and just wasn’t good enough. He drops back to his pet distance now of 1200m – he’s had four starts at the track and distance for two wins and two 2nds. The barrier draw and the speed in the race is going to make this very tough for him.

Very interesting runner and looks one of the big players. He’s won six of his nine starts and his run in defeat last start was good, I thought. Third up, up to 1200m suits, and the winkers go on for the first time. He draws to get a sweet run, but the inclusion of Condor Heroes in the race really isn’t ideal for him. Instead of being able to dictate, he’s going to have to chase a hot speed, which is likely to make it hard for him to hold off those coming from off the speed. I think he’ll run a big race but think he might just find one better.

Absolutely flying this horse but this is by far his biggest test. He’s won his past five starts but was disqualified from one of them after returning a positive sample. His two wins this time in have both been comfortable but they’ve also both been in Rating 72+ races. He now steps up to WFA Group 1 company, so it’s a significant step in grade, and the barrier draw has done him no favours. He got the absolute dream run last start and although he did win easily, it was only Long Beach and Highland Beat that he beat. They’re no world beaters. From 12, tactics will be interesting. I expect they’ll try and slot in midfield or maybe a touch worse, but he’s not going to get the dream run he got last start. Can run well but might just be too early for him.

She was well-beaten first up but that wasn’t ideal circumstances for her. It was a complete bog track, they ran it along fairly quickly and she just got run off her legs. She will be much better suited on a firm track and up to 1200m second up from a spell. I do question whether she’s at her very best though, and the stable aren’t at their very best in my opinion. They’ll go hard which can bring her into it but I doubt she can win.

Each of her runs this time in have been good. She was sound first up over the 1000m when beaten a touch over 2L by Indian Pacific. She then ran 2nd to Valour Road in the Prince Of Wales Stakes when coming from well off the pace, and she was good to the line again last start behind Celebrity Queen in the Colonel Reeves. She will be a long way back from the wide draw but she’s not hopeless of running a place at huge odds.

Absolutely flying, this mare. She’s won five of her past seven and with any luck in the two she lost, she probably would be seven from her last seven. She’s got a terrific record at this distance and she should get a nice enough run in the moving line from barrier 10. Chris Parnham keeps the ride and Pike probably would be on her but didn’t think she would necessarily keep winning or make the field, hence he took the ride on Trekking. She should run very well but if she’s back with Trekking, he’s surely got her covered.

Set to play a major part as the main pace influence in the race. He’s got no hope but he should go to the front and ensure this is run at a very solid clip.

I just can’t see how (1) Trekking loses this if he produces his best form. He’s a legitimate, Group 1 WFA sprinter with proven form at this level, which very few others have. He started favourite in this race last year and ran 4th and he finds a much easier race this year, as well as Pike booked to ride. If he gets a good run in transit, I think he wins. (6) Vital Silver might not be at his best but if he can somehow produce something close to it, he’s definitely the horse that’s slipped through the cracks. Include him at big odds. (12) Indian Pacific is one of the new kids on the block and will run a mighty race but the inclusion of extra speed isn’t to his advantage. If (8) Stageman can jump clean and settle close, expect him to be right in the finish. 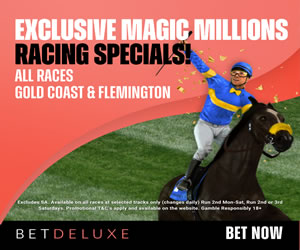