Ascot hosts a nine-race card on Saturday afternoon and Tim Geers’ best bet comes up in the opening event. 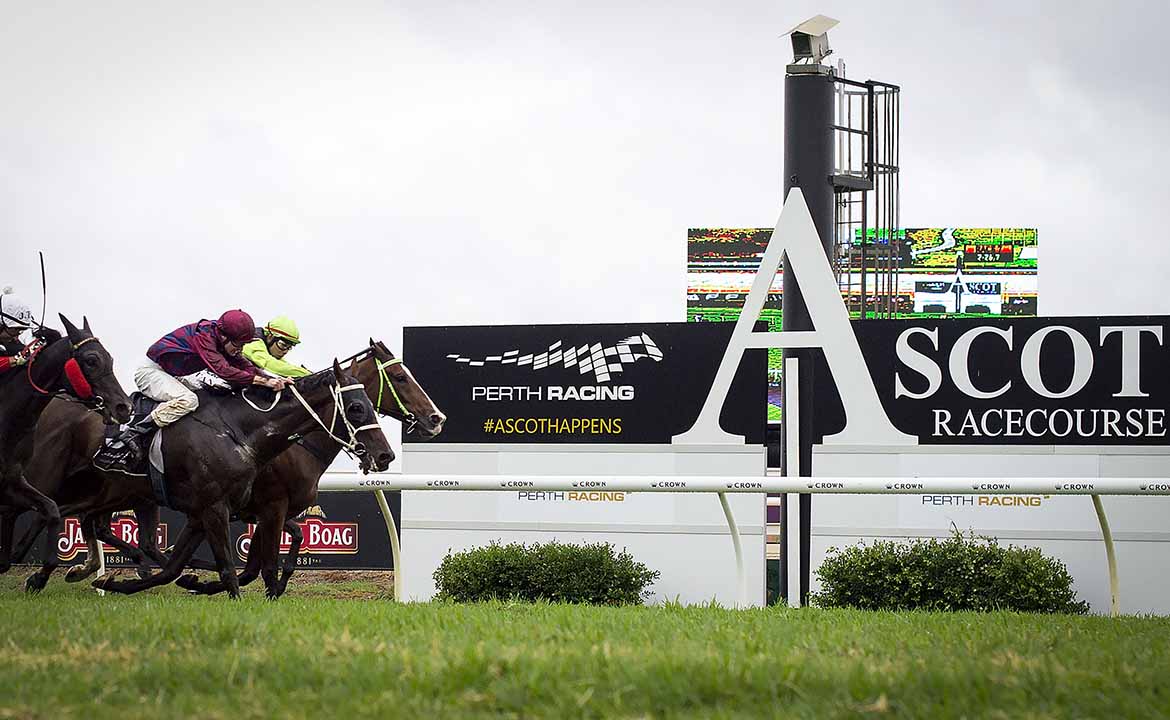 WA racing continues at Ascot on Saturday afternoon, where we have nine races on the card, including a couple of exceptionally good contests.

The track is currently rated a Soft 6 after a deluge of rain during the week in Perth, but that could dry out as the meeting progresses. The rail is in the 2m position.

Tim Geers has previewed every race on the card with his tips and betting strategy below.

(2) Acromantula was impressive on his resumption to racing two weeks ago, where he led all the way over this track and distance. He’s won two of his three starts, both of the 1000m, with his only loss being when he pulled up with the thumps. Should be able to find the front from barrier 2 and despite going up in weight, is the one to beat again.

(3) Vadette De Star recorded the fastest final 400m of the entire meeting when running 3rd to Acromantula last start. That was her first run for six weeks. Her biggest problem is her racing pattern, which sees her get back in the field. She’s likely to be back there again and if she gives Acromantula a big head-start, she’ll struggle to run him down.

(1) Queen Brown has some strong form littered through her page. First up last prep she ran 2nd to Clairvoyance, with Gemma’s Son back in 3rd. Following that she ran in four Listed races in a row. First up here, no shock to see her run well, but this might also be short of her best.

A race for the two-year-olds here, and this is one I’ll be sitting out of.

(6) Ruthless Tycoon has trialled up particularly well for his debut here, winning two 950m heats at Lark Hill. In his latest trial, he led the field up and when they levelled up to him in the straight, he kicked away again nicely under minimal pressure. There only appears to be moderate speed here so expect him to roll forward and if he settles well, he should prove hard to run down.

(1) Fatale Femme bounced back to something like her best form in the Karrakatta Plate last start, working home nicely into 4th behind Ex Sport Man. Troy Turner jumps off another horse in the race to ride her and she draws well in barrier 2.

(7) Queen’s Gift is the horse Troy Turner jumps off to ride the favourite. She’s run 2nd in her two career starts and was only beaten by a whisker last start. Drawn well today and no reason she can’t be competitive again.

(1) Home In Five is a horse I’ve got plenty of time for and he resumes from a spell today. He won three of his four starts last preparation, with his only defeat coming when he was literally held up the entire straight. He resumes with the bar plates off today and the pads on instead, which is a positive sign that his feet are in better shape. Carries the big weight but he’s done so before and can do so again. Chris Parnham rode him in both trials but jumps off to ride the Peters horse here – that’s not a great sign but he basically rides all the Peters horses when Pike is away, so it’s not necessarily him leaning to the better horse.

(8) Billy Ray is the horse I speak of, and he’s already been supported in early betting. I declared this horse a superstar from his early trials, but he struggled to produce that on race day, notching up three placings at short odds in his first four starts. He resumed with a promising run behind Just A Pinch first up. I think when he learns what the caper is all about he’ll be a decent horse, but whether he still does too much wrong is the concern.

(4) Holy Ghost should have more than one win to his name. He always runs well, he just often leaves too much to do. He’s got a big finish on him and one day soon he’ll win a race like this.

(2) Pure Magnus comes to town from Kalgoorlie. He won first up and then ran well in defeat last start. He tends to go well third up and the fact Peter Fernie brings him to town suggests he’s a live chance.

Interesting race over 2200m here. (9) Treat Yo Self comes up favourite after an easy win over 1800m in Class 3 company at the midweeks last start. She ran that in 1:52.05 which isn’t very quick. She was able to completely dictate the race from the front and then kick away in the straight. This is a step up in grade but there looks to be very little tempo again, so she might get away with it, but at the prices I’m not keen to dive in.

(4) Black Shadow took two runs to get fit but he’s hit form now, winning two starts ago before being edged out last start. He won his 1800m race in 1:49.53, about 2.5 seconds quicker than Treat Yo Self’s winning time last start. Granted it’s hard to line them up on different days but that’s about 15L quicker. Draws well again and has won over this track and distance before, so the $5.50 looks appealing.

(7) Secret Pearl looks the value at $8.00. She is another that took a couple of runs to get fit, but she showed last start she’s ready to win. She loves this distance and should be ready to peak. Draws barrier 1 so should get a suck run behind the leaders and with any luck, should be hitting the line hard.

(1) Come Right Back next best.

(2) Beret was a touch unlucky in defeat over this track and distance last start, copping a heavy check at the start of the race before running home strongly to be beaten 0.25L. She draws out again today in barrier 10, with Laqdar Ramoly taking the reigns from William Pike. If she can find a spot in the running line to the turn, she should be hitting the line strongly.

(6) Koranis just didn’t see out the 2100m last start and now drops back to 1800m. He put two wins together before last start and gets his regular jockey Kershaw Dhurun back aboard today. Draws a soft gate and can bounce back at each way odds.

(8) Off Wego is racking up the placings and although looks well-placed again, I have to take on at the price.

Chances don’t end there in an open race.

Going to give (8) Not To Be Mist one final chance today. He was never a winning chance last start on a day which played heavily to those on speed. He ended up buried away back in the field with 60kg. Gets the blinkers off for the first time today and the tongue tie goes on. Down in weight, this is his chance.

(3) Watch Me Dance is the class runner who drops back into 78+ company. She ran 2nd in this grade behind Tycoon Storm three starts ago and has since run in Listed company. She has the advantage of putting herself on speed, while her main rival will be back behind her.

(4) Majinika makes his debut for a new stable after winning at big odds last start. He’d been luckless in several runs up until that point. Hard to know how he will go as a 9YO gelding having his first run for the new camp?

(7) Position of Power will bob up in a race like this soon and if the track is still soft, his chances go up enormously.

Betting Strategy: 1 unit WIN Not To Be Mist, 0.5 units WIN Position Of Power

What a race this is, but it’s nearly impossible to bet!

(5) Miss Conteki comes up the favourite at $2.35 which is probably an acceptable price, but it’s the kind of race she could come out and stamp her authority as the real deal, or get found out against some elite horses. She’s won six of her seven starts and draws gate 1, but there’s a chance she may be buried three-back the fence here. Hard to know where she gets and plenty will depend on how she jumps. This is her acid test.

(2) River Beau is absolutely flying. He was run down late by Miss Conteki three starts back but has since won his next two. He loves the 1000m and draws ideally in barrier 2. He should be able to sit box seat or one off the fence in 4th. Notably they elect to carry the full 61kg but he’s not a horse you’d put an apprentice on.

(1) Gemma’s Son is also flying. He was luckless in 3rd behind River Beau last start after sitting three-wide the trip. Bar plates off today, well drawn in barrier 3 but does have the apprentice on.

The leader here will be the resuming (8) This’ll Testya who is a speedball. She’s won her two starts when first up by a combined 7L. She’s always shown she has enormous talent but she can be her own worst enemy. They’ll let her roll fresh here and it would be no surprise to see her run them into the ground.

(6) City Circle won a similar race two starts back in a smaller field, before taking on a Graduation Handicap last start where she was beaten less than a length. She needs the ground as firm as possible – it’s currently a soft 6 but could dry out in time for this race. She will be very competitive if it gets back to a Good 4.

(3) Image Keeper is three from three this prep and is the horse to beat on current form. Goes up in weight but it’s hard to knock current form.

(4) Morgs Freeman can go well at double figure odds, as can (7) Prized Nemesis, (10) Lacevinsky and a host of others.

(12) Mini Winnie is flying, winning two on the bounce before bumping into the smart Billy Ain’t Silly last start. Tinsnip was back in 3rd on that occasion and that horse then came out and won last weekend. Needs a good ride from barrier 8 but if he can get one, he’ll be very hard to beat again.

(4) Staralign comes to town from Kalgoorlie and he’s been good in his two runs back from a spell. Draws wide but they wouldn’t be bringing him here if he wasn’t a chance.

(5) Diablerie has a poor record at the track and distance but his past couple of runs have actually been quite god. He’s come from last or near last on both occasions and let down strongly to run 4th. Drawn closer in barrier 4 today so doesn’t have to be so far off the pace and if within striking distance, can definitely run a good race.