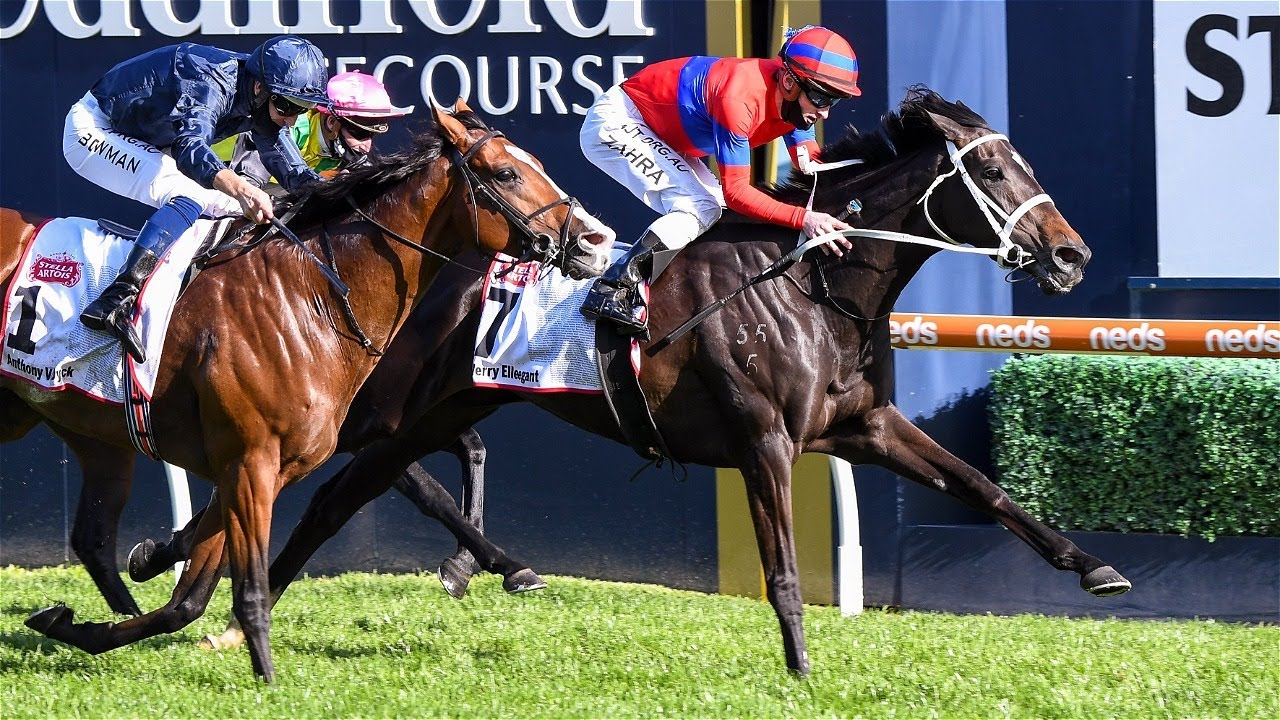 The Group 3 John Monash Stakes headlines a good card at Caulfield on Saturday, where all eyes will be on Jamie Kah and her quest to ride 100 metro winners.

Trent Crebbin has done the form and has found plenty of roughies in his selections, including his best value at $81 in the last.

The track is rated a soft 5 and the rail is true.

Unless a first starter really shows up on debut, I think this is a race in two. (1) Zapateo was a very good winner on debut at Geelong, coming from a long way back to win well. The market has liked that race, finding plenty of horses out of it, but the form hasn’t really stacked up, with Nasdana, Ruby Mockingbird and Grey At The Ready all well beaten at their next start.

(10) Viviane should settle a fair way in front of the favourite but was a touch disappointing last start at this T/D when sitting wide but not doing much late. The first up run behind Argentia was excellent and good enough to win here. Perhaps a firmer track will be to her liking.

At the current prices I’m happy to stay out and try to ascertain a pattern- if Zapateo comes from worse than midfield to win the track should be playing fine.

I know he’s got to concede a lot of weight but I couldn’t believe (1) Zipping Boy went up $10, coming off three straight wins. He had the favours but still did well to hold off Express Pass at Sandown, who won well his next start, and Zipping Boy is 4/4 at 1100m. Alana Kelly is riding well at the moment, I think the horse will lead, and even with the weight he’ll take some running down.

(4) Deep Speed is the threat. He won his first two starts stylishly, although the form out of all his runs last prep have been poor. He beat Show Some Decorum at The Valley who is a proper bm64 horse, ran 3rd to Shelby Cobra at Flemington who has done nothing since, and 2nd to Ocean Beyond before a spell who has done nothing since. Looks talented and with 6kg off Zipping Boy and Kah on, he’ll be hard to beat.

(2) All Of Brighton will improve out to 1100m but I much prefer him at Flemington and he’s been up a long time.

(8) Brazen Bully walked in on the synthetic first up and gets in with 51kg with a beautiful map. He’s been backed early but could still be backed at double figures.

Having a decent bet each way Zipping Boy and something small each way Brazen Bully, trying to get Deep Speed beaten.

(9) Zorro’s Dream doesn’t win out of turn but is racing very well and looks nicely placed here. I don’t think 1000m is his ideal trip but he was only nabbed by Express Pass very late last start, and the start prior at Geelong he was a very good run from back in the field. He gets a 3kg weight swing on Kalkarni Royale from that race and a good draw.

(5) Kalkarni Royale has become quite consistent around this level and was good at this T/D last start in bm84 grade against the mares. I thought she got all the favours at Geelong with a longer SP than Zorro’s Dream, but from barrier 1 could lead again.

(4) Meteorite is a tricky one. He hasn’t been leading this prep, almost ridden midfield at two starts in. The win last start was good, but I’m very wary here. Go back to last prep, he had that huge 955m win, then won on a heavy track which seemed to cook him and he was below his best for the next three runs. This prep, he was okay first up, won on a heavy track 2nd up, and now goes out to 1100m. Enough to be against.

(14) Madam Superior isn’t the worst at huge odds. She was rock solid last start, only 1L off Kalkarni Royale (who admittedly had a tougher run) but does meet her 1.5kg better, keeps Froggy who is riding big priced winners everywhere and maps for a beautiful run from barrier 2. $34/8 is a big price.

(10) Sugartown was disappointing in a strong 3yo race down the straight last start behind Curran when $4.40. She raced keen and didn’t finish off there, and perhaps around a bend will be better suited. The two wins prior were good and she gets Kah on.

(1) Forever Free keeps racing well despite often not leading (as she used to have to do) but up to 1100m is some query, and she gets up in the weights. The 3rd to Malkovich last start reads well.

(4) Zesty Belle won her first two last prep but I don’t think she beat much. The $2.80 SP, 2.4L defeat to Yulong Command ties in Sugartown with that 3yo sprinting line. Map is a bit tricky for Opperman who has never ridden at Caulfield.

(15) Astronomicelle ties in with Sugartown through Moor Wanted, the ‘winning’ margins 5.5L and 2.4L respectively. She’s racing very well and the 3rd to Diamonds at Sale three back reads well and again ties in to Hai Sun through Bubbly Lass. Notably, she gets in with 51kg and maps for a decent run from 2. Don’t love Carleen having to find a gap but at $10.00 she can run well.

(6) Tooradin on top who looks ready to peak 4th up at 2000m. He won his first two this prep nicely and I’m happy to forgive last start when 2nd to Falls, who is a very good wet tracker and did lead on that biased Sandown track. He mixed his form in his first prep at this distance range, but I’ve got no issue with him at 2000m- I think he’s come back a better horse and was end of prep for his last three last prep. Melham rides, which suggests he’s Maher/Eustace’s best chance, the map is perfect, and a soft track, rather than heavy, is ideal.

(3) Zachaz is the other Maher/Eustace runner who should run well. He hit the line well in the Swan Hill Cup when not really suited back to 1600m. Up to 2000m now 4th up, he’ll be charging late but will have to run down Tooradin.

(4) Excelman bolted in under an awesome J Kah ride two back but was a touch plain last start, and loses Kah for Stockdale from a tricky barrier.

(16) Reflect The Stars races well 2nd up and at 2000m but will continue to improve and I’d have thought Olly would be on if she was ready.

Keen Tooradin- with the map favours he gets I’d be shocked if he misses a place and having a good bet 1×2 as a result.

Yet another one of these 3yo staying races. (7) Red Santa went to Sydney and chased home Wicklow in his last two after failing behind Rosseau at this T/D three back. Gets Kah from barrier 2 and no weight, looks hardest to beat.

(1) Namakwa can improve off last start if he rolls along like he did winning two back.

At odds, and fitting the recent trends, is (12) Heleva Deel. The synthetic to turf transition has worked many times this Winter, notably with Namakwa two back, and horses claiming below the minimum has also been profitable. Heleva Deel looks suited up to 2000m after chasing stoutly on the synthetic last start over 1600m, and drops a whopping 12kg in weight with Alana Kelly claiming 3kg. Gets a lovely run from barrier 4 and at $23 I’d rather follow the trends than back one of the numbers that keep racing against each other week in week out.

Pretty keen on this being a two horse race. (3) Think ‘n’ Fly looks ready to peak 3rd up, where he’s won 2 from 2. Was rock solid first up behind Biometric and Adelaide Ace, and ran 2nd to Degraves last start when hampered late and protesting. Should sit midfield and be hard to beat.

(9) Chief Altony is the obvious danger. He should’ve won two back and was given a lovely ride last start at Sandown to win well. Gets in with 54.5kg and if Stockdale gives him another 10/10 he’ll be right in the finish. A good track is perhaps a slight query and the stable have said he prefers some give.

(7) Thought Of That clear next best, he was good first up but just doesn’t win and Chief Altony was a better run (and SP’d $2.00) in that race.

Feature of the day is a tricky 1100m sprint. (12) Villami has a great fresh record with 3 wins from 4 starts. She was too fast for California Zimbol and Pandemic first up last prep, conceding both weight, before chasing Ancestry. I think she probably holds out Malkovich for the lead and under WFA she gets in well with 56.5kg.

(10) Malkovich steps out to 1100m after winning well with the big weight here over 1000m last start. Kah goes on and this is probably her best chance all day. He’s got a good 1100m record, but I probably prefer him at 1000m and this is harder than last start.

(3) Order Of Command races well fresh but very likely goes back from the gate and will need to run the leaders down. First up last prep he ran 3rd at group 3 level to California Zimbol, which obviously ties in. The run in The Galaxy behind Eduardo would win this and I’m a bit surprised Olly has chosen Viridine.

(2) Tactical Advantage isn’t the worst. If he was 3rd up here he’d be my best value of the day. His run first up was better than it looked in the worst ground with a big weight. The trial since was very good and Froggy on at odds is very scary.

(6) Red Can Man can definitely improve on a drier track and around a bend. Would’ve liked him up in trip though.

Tough race. I’m a big fan of (13) Grinzinger Allee and have been for some time. I loved his win at the end of last prep, really charging late to run down Holbein and Fundraiser off a brutal tempo. The first up run splitting Rule The World and Regardsmaree certainly reads well, but he will have to circle the field and run them down.

At huge odds, (6) Easy Beast isn’t completely hopeless. He was given none in the Golden Topaz, sitting 3 wide no cover midfield. His 2nd up record is very good with 5 quinellas from 7 starts, and he’s had a 1350m trial since, which he won (was ridden out). 2nd up last prep he ran 2nd  at this T/D to Rich Hips, conceding her 3kg, and she’s since a dual group 3 winner. Senior rider on, drawn beautifully, should be right on speed and outrun the $81.

(8) Jumbo Ozaki was good first up off a long spell behind Corner Pocket. He generally races very well 2nd up and maps to do no work from 2.

Backing Easy Beast 1×3, saving Grinzinger Allee to break even. Wouldn’t be shocked if he drifted to $4 with the map.