Doomben hosts racing in the Sunshine State this Saturday with a bumper nine races on the card. Joshua Reed has found plenty of bets for the punters to dive into. 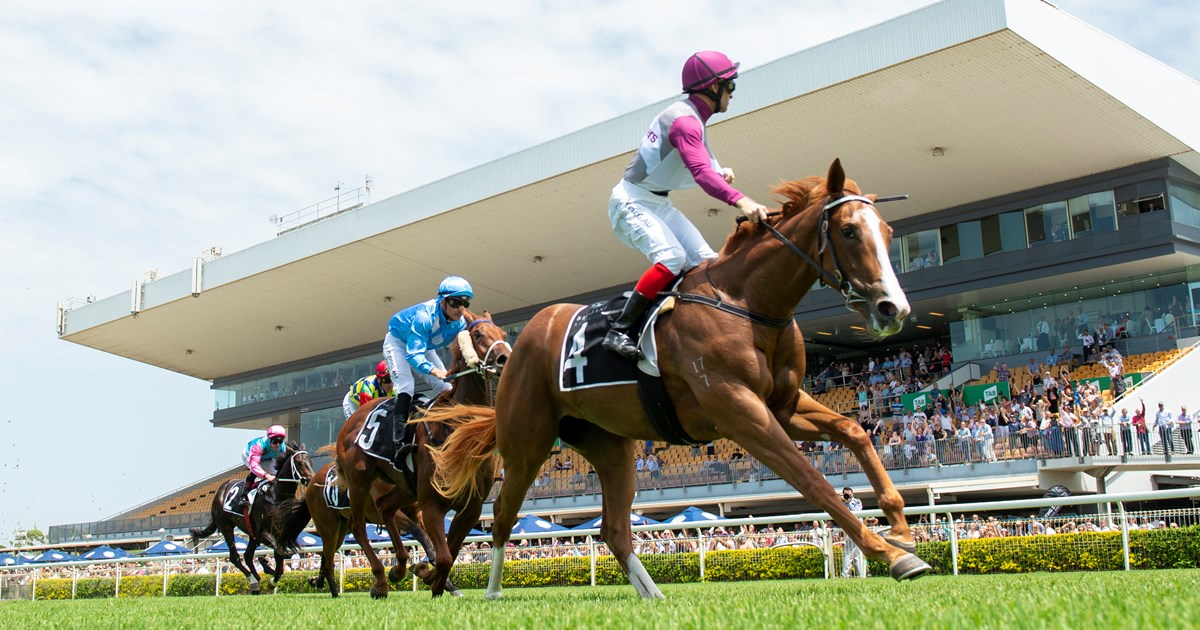 Doomben hosts its second meeting in three days this Saturday with a solid nine races to support the races at Flemington and Randwick.

The weather looks fine so the track should remain a Good 4. The rail is in the 1.5m position which should ensure a pretty even track with advantages to those on-pace.

Joshua Reed has assessed all the races and found seven bets over the nine races with his two best bets below.

This does look a nice race to open the day and I have settled with (6) Leadership Spill from the Tony Gollan yard. I was on this bloke before he was scratched a fortnight ago and I believe he is much better suited for this race. He has drawn the inside gate which is brilliant at Doomben especially if you have the speed this guy does early. He should be able to sit pretty handy with the majority of the speed drawn to the outside. His first-up record is perfect and gets Ryan Moloney aboard which is nothing but a plus. The track should dry up nicely and we should be able to start the day off with a winner.

(1) Chico Milagro is the stablemate to our pick but has drawn poorly here. There is no doubting that he is the better of the two but being drawn out wide and being first-up with 59kg is a big query. Nevertheless, he should be hitting the line nicely.

(4) Acumen should come on nicely from his first-up but the wide draw is a query. He is another who should be there late.

Looking for Gollan to go back-to-back here with this promising filly in (6) Miami Fleiss. She made her debut at the Sunshine Coast in a Friday night meeting where she started positively and hit the lead very early. From the turn, she didn’t leave second gear up the straight whilst the others kept whacking away. Not once was she asked to do anything and still won by 7 lengths. I know this is a lot harder but with race day experience under her belt and time to strengthen up, she is going to be hard to stop.

(2) She Can Sing is one you can probably back outside of her if you feel the need to back something to bear her. The stable must have an opinion of her as they nominated her for the Light Fingers in Sydney to which she is an emergency. After back-to-back wins at Ipswich and the Gold Coast, she comes here well credentialled and very fit. She is the biggest danger to the favourite.

(3) Little River is the best of the rest.

Seems the favourites are well suited in the early races and once again looks the one here.

(2) Azzareach has had two runs in this preparation and both have been superb. First-up she took on a fit Bleu Zebra at this track over the 1050m where he was very game but no match for her over the closing stages. Subsequently he beat the rest of the field 2.8 lengths+ whilst Bleu Zebra won well in her next start. He then travelled to the Sunshine Coast for a 1000m race and he was too good for his rivals, winning by 1.3 lengths. He steps back to taking on his own sex and age group here and is drawn ideally to kick up and hold the lead or at least box seat. He is going to be hard to beat.

(4) Apache Blue is good odds for a horse who is yet to lose. He was dominant at Tuncurry on the heavy going before heading to Taree and again winning nicely on the heavy going. This is a lot harder but you can’t knock him and will go forward from the gate. This will be his first go on top of the ground, so you should see a similar if not better run, it’s just a matter of if he is up to it or not.

(7) Bi Turbo ran well and hit the line nicely at the Sunshine Coast on debut, despite shifting into another runner in the straight. He will come on nicely from that run and be hitting the line.

This is a hot little race and there is plenty of speed.

(5) Glorious Ruby was very good on debut behind Swift Witness in the Gold Pearl Quality before heading to the Sunshine Coast where she was dominant leading the entire way to win by 2 lengths. There have been 2 horses from that race that have run well since which further supports her chances here. She is drawn well here but will likely concede to third or fourth with cover before peeling off them in the straight.

(3) Better Off is one who doesn’t have a lot of speed and will camp just off them incase they go crazy. It was a terrific win back in October over the 900m at the Gold Coast where he was wide the trip and still powered away for a one length win. If things go pear-shaped in front, he will be there to strike.

(2) Mishani Delight is on the quick back-up after two wins this preparation. He is likely to get a similar run to (5) Glorious Ruby and just camp back off the two leaders but I don’t think it is his style. I think he will be thereabouts.

(3) Good Chat looks like a good bet. He has been up a while, but his recent form has him much better than these. Two back at the Gold Coast he was solid when finishing third by less than half a length behind Boomnova before heading to Doomben over the 1200m where he was no match for the in-form Garibaldi. Although he only went down by 1.8 lengths, he beat the rest of the field by 2.5 lengths. He will appreciate the good surface and his one go at 1350m was very good, so the distance shouldn’t be a worry.

(10) Scottish Mist is 2/2 at the distance but she is yet to win at Doomben in 3 attempts, but to her credit, he ran 3 placings. She should appreciate the good surface also and the drop in weight brings her right into this. She should get into a nice spot from the draw and be right there in the finish.

(14) Portuguese Tart ran well in third last start at Eagle Farm and is on the quick back-up. Leah Kilner takes 3kg off her back which gives her barely anything to carry whilst the step up in distance will suit.

I blackbooked this runner after his last start placing and he should go close here.

(8) Jetski finished 2.3 lengths back in fourth two starts back before missing the start at the Sunshine Coast last start in a similar race. He come home nicely despite running home in the worst part of the track to finish 0.9 of a length off Perfect Aim and rival (6) What the Fuss, to whom he meets 1.5kg better off. He has drawn ideally and providing he jumps with them; he is going to be hard to hold out.

(6) What the Fuss had his chances last start but couldn’t get the job done. He finished 0.1 of a length off the winner over the 1200m and steps up to an unfamiliar distance here. Despite this, he is drawn well and should get an ideal cart into the race.

(4) Take Tea was impressive last start at Eagle Farm after being patiently ridden at the back of the field. She is drawn much better and should sit closer in the run, which will increase her chances of running a bold race.

(6) Socialising is a special mare who is up to her ears in this race. She was very good chasing down You Make Me Smile last start at Doomben over the 1200m, whilst easily disposing of the rest of the field by 1.6 lengths. Before that she didn’t handle the step up in grade to stakes grade, nor did she handle Eagle Farm that well when finishing 7.8 lengths back in ninth. She is ideally drawn here and well weighted. The good surface suits and I think she will handle the step up in distance well.

(3) Grey Missile is coming back from a freshen up and generally runs well over this distance and track. The firm surface suits and is likely to at least run a placing, despite having to give ground from the draw to some key rivals.

(5) Plitvice is back from a let-up and may struggle a touch in the early going. He will have some decent fitness on his side and should be hitting the line nicely. Include in your exotics.

There is a couple here coming from the same race at the Sunshine Coast and I believe two of them will run bold races.

(9) Enterprise Prince went into my blackbook after his last start fourth behind Star of Michelin, Penshurst and rival (8) Couldn’t Refuse. He came home solidly but he wasn’t in the right part of the track, so he was unable to reel in the runners in front. He meets (8) Couldn’t Refuse at equal weights, but our bloke is draw much better and I think our bloke can run solidly over the mile. I don’t think he will be too far away here.

(8) Couldn’t Refuse led last start and didn’t hold on late and I think he can sit prominent again but will cover. His record over the mile is good but he has to contend with an iffy draw. I think he can run another big race.

(10) Mangione can run a solid race at each-way odds but will have to contend with a horror draw. He will be coming late.

He has found a new lease on life since losing his manhood, but (3) Garibaldi is staring down win number 4 in a row. He has been racing in tremendous fashion, winning at Eagle Farm two back by 1.8 lengths over L’Cosmo and 4.1 lengths to the rest of the field before heading to this track and distance last start and once again saluted by 1.8 lengths over Good Chat and 4.3 lengths over the rest of the field. He is drawn ideally from barrier 6, gets a good surface and drops 3kg in weight from his last two starts whilst stepping up in grade. I am confident he is the best bet of the day.

(11) Unguarded missed the start at Sunshine Coast but come home fast to finish 1.6 lengths back in fourth. She was in the worst part of the track, so her effort was very good. She is drawn poorly here so she will have it against her from the get-go, but I think she is massive overs.