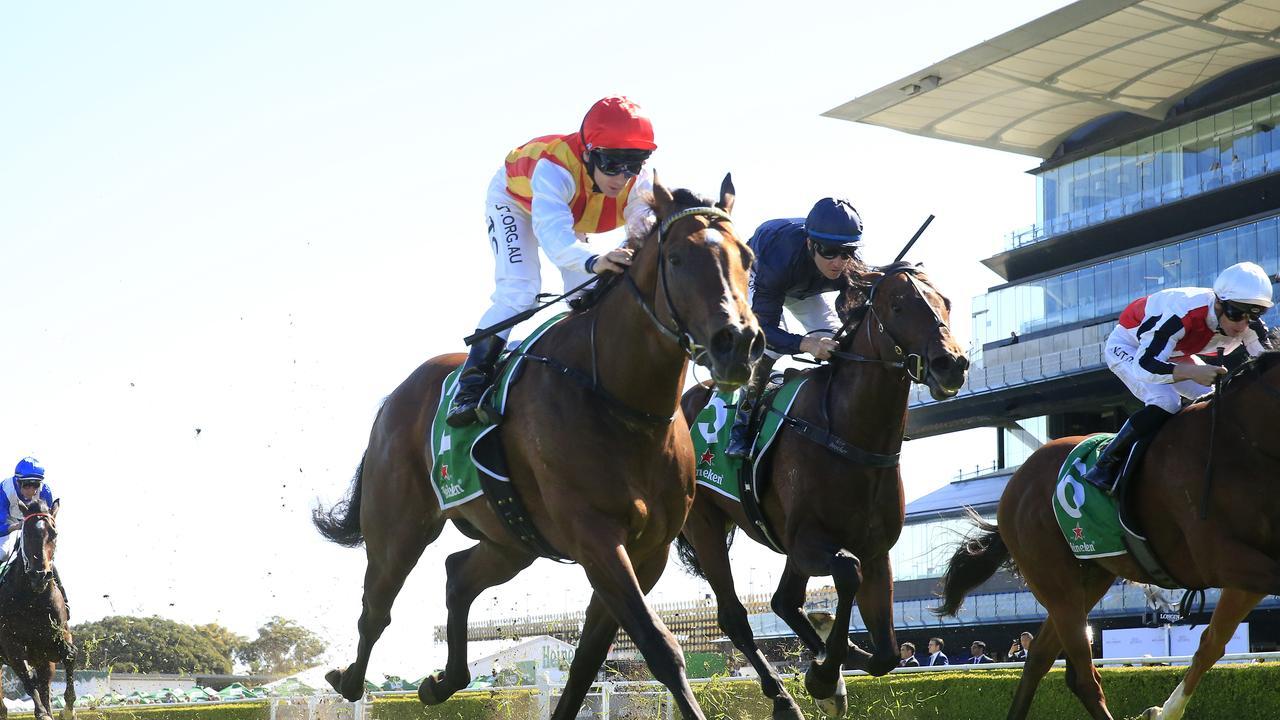 Royal Randwick hosts a bumper ten race card this Saturday which could throw up some rough results with the uncertain weather.

Joshua Reed has analysed all ten races with bets in half the card. Below are his best bets on the card.

The Chris Waller trained (6) Coastwatch is over the odds here and should run a nice race. I am completely forgiving the first-up run where the colt got back from the poor barrier and race greenly throughout. Last start at Warwick Farm, the blinkers went on first time and the improvement was out of sight. He raced in a more forward position and got held up in a key part of the straight and arguably should have won. He got clear very late and the acceleration through the line showed he had plenty in the tank. I love that James McDonald has stuck with him from a nice draw and should be right there in the finish with the fitness he has under his belt.

(5) Zarastro is the stablemate of our top pick and he has a bit of ability about him. I would rather see him under race day conditions but he does look an impressive colt.

(2) Paulele was wide throughout in his debut at Moonee Valley and still disposed of his opposition with ease. He is the favourite here but this is a lot harder than what he faced.

Once again, we have two highway races and this first one is very open. (3) Costas is who I have on top here on the back of a 2.6 length seventh at Scone first-up. He gave a bit of weight to most of his rivals there, which was always going to be a task. As they rounded the turn, Aaron Bullock had him in a nice position but had no way out until halfway up the straight where I thought he accelerated nicely to the line. It was going to be tough with the weight over 1300m first-up on the back of one trial, but I think he did enough to show he has returned well. He has drawn nicely here and drops 2kg on that last run whilst sticking at the 1300m. If the rain comes it won’t both him and once again, I think he is a touch over the odds.

(1) Perfect Pitch is the other I like in this race who is about the right price. She has plenty of form around city grade horses and has been weighted that way. Ellen Hennessy uses her 3kg claim here but it is a bit of a query using her in town mainly due to inexperience and familiarization, though they have to start somewhere. Good luck to Ellen.

(8) Westgrove will head forward from the inside and if it plays leaderish, he will be in it a long way.

(5) Kattegat has drawn a gate this time in and will go close to taking this one out. Last start at Rosehill over the 1200m, he ended up further back than they wanted due to the barrier draw but flew home from tenth to finish 1.4 lengths in third. He will be much better suited to Randwick and will be able to sit in a more forward position from the inside draw. So long as he gets luck, Rachel King should be able to peel off the leaders backs at the top of the straight and be hard to stop over the 1300m.

(11) Clay Pan Boogie has had a nice start to his career and is coming back from a small let-up which was filled in by a nice top up trial. Handles all going and will be as fit as a fiddle.

(3) Great Buy is a massive price and worth playing for multiples. He is fit, handles the soft going and is getting to a more preferred distance.

I think (1) Elaborate gets in here nicely carrying the 58kg as the top weight. There looks to be little speed on paper with the two leaders being (4) Vadiyann and (6) Gone Bye, who could ruin each other’s race. From the middle barrier, Tim Clark should be able to get our bloke into a nice position just off the leaders and be able to stalk them the entire way. He has the fitness under his belt and proved last start at Kembla Grange he can handle the grade and in the past he has showed he can handle 2000m and a wet track. Brilliant each-way odds.

(8) Accountability is the danger if they run. Keeps stepping up to the mark and gets in nice and light here.

(11) Parry Sound is one I think can run a nice race. Coming back from 2400m to 2000m isn’t always positive but with a potential wet track, his experience over 2400m and on wet tracks will come to the fore.

(4) Fulmina is who have landed with here on the back of a nice first-up run at Rosehill. She had to go back last start due to the poor draw, but showed how well she has returned, flying home from last to finish within a length in third behind Two Big Fari and Great News. Despite having to give 0.5kg to a couple of her rivals, she will be much better placed from a better draw and will be suited to step up to the mile. Any drops of rain will help her cause but even without it, she is the one to beat.

(2) New Arrangement has had no luck over his last two runs. Two back he was three wide the trip and still finished in fourth and last start was locked on the rail and given no room. Expect an improved performance.

(3) Betcha Flying will be hoping the rain stays away to bring her into the calculations.

I don’t like this race one bit and couldn’t really make a big case for anything outside of (5) Vitesse. She is drawn nicely in barrier one though I do believe they will be off the fence in the straight. She handles most going but if it comes down to a slog out in the wet, she will be in a prominent position and will hold most of the other front runners at bay. I think she will only get beat if she does too much work throughout and tires, but I think she will get in front easy and be able to dictate. If the rain comes, it will only help her cause.

(2) Helga comes right in if the rain stays away. She returned well at Kembla Grange and I expect significant improvement here second-up.

(1) Savigne was good last start and fought all the way to the finish. Drawn a touch more awkwardly here though.

Happy to go with (10) Sally’s Day here on the back of a solid first-up run at the Kensington behind Lillemor. She gets multiple things in her favour here especially from a nice draw. She should be able to sit in a more prominent position to her previous run and she drops 6kg in the process. She handles the wet no worries, so that box is ticked, and she gets to tackle this race with a run under her belt. The only query is the step back to 1000m, though I think she will be forward enough in the run that it won’t worry her.(5) Longbottom was a bit average first-up at Wyong but I expect to see her bounce back here. Her second-up record is good, and she will relish the sting out of the ground, having performed well on it previously in much harder races. I like the addition of Hugh Bowman, who should give her every chance from the inside barrier. I am expecting a bit run from her at nice each-way odds.

(3) Lashes is the danger here and will love it to pour down. I am a touch worried about the 58.5kg first-up from a poor draw, though she has proven in the past it hasn’t been an issue.

(11) Our Bellagio Miss is expect to improve off her previous run and I wouldn’t be leaving her out of your multiples.

This race looks to have little depth, so I have put (10) Hilo on top here. Ran past his rival (7) Edison two back over the 1200m on the heavy going before heading to Newcastle and being no match for similar opposition back on top of the ground. The blinkers come off which will be a concern if the copy the pattern that they did last time the blinkers come off, but that could work a treat depending on track patterns.

(7) Edison is the obvious danger and will head forward from the wide draw. How he fairs late here depends on how much work he has to do early, though he doesn’t mind the distance or possible track conditions. Tim Clark is the right man for him to be a chance.

(12) Badoosh will need to hit another level but it is highly possible for him to do so, especially with the low weight.

(3) Passage of Time next best.

Tough race here with multiple chances, going to go with (7) Mo’s Crown here on the back of a solid draw. After winning nicely two back at Kembla Grange, he went up in grade and wasn’t disgraced, going down by less than half a length. James McDonald jumps back aboard and he gets back up to the 1200m to which four of his five wins have come. Also, four of his five wins have come on the soft going or worse which will suit him with the weather predicted. He should be able to just sit off the leaders here who will provide a solid tempo, before peeling off them in the straight.

(4) Poetic Charmer was massive last start and would be on top had he drawn a gate. He is going to give them a start and will be flying home late.

(10) Kordia is first-up and he no doubt has class but I just think that it might be a tough ask for him.

(8) Black Duke goes on top for me in the last, after narrowly going down in this grade last start. He was over-run late by Oscar Zulu whilst still beating home Kiku. His draw does look tricky, but it shouldn’t be a problem this late in the day and he should be able to find a nice enough position for the run throughout. With no weight on his back, the step up to 1400m and a potential wet track, he is a nice each-way play to finish the day on.

(4) More Prophets is coming off a nice win at Warwick Farm and can be ridden a touch closer from the gate. 1400m is no worries and she won’t mind the sting out of the ground.

(10) Zoumist will be fitter for the runs and does look an each way chance.