A huge day to dissect from Caulfield and Randwick and Trent Crebbin has reviewed the meetings, found the horses to follow and where they head next. 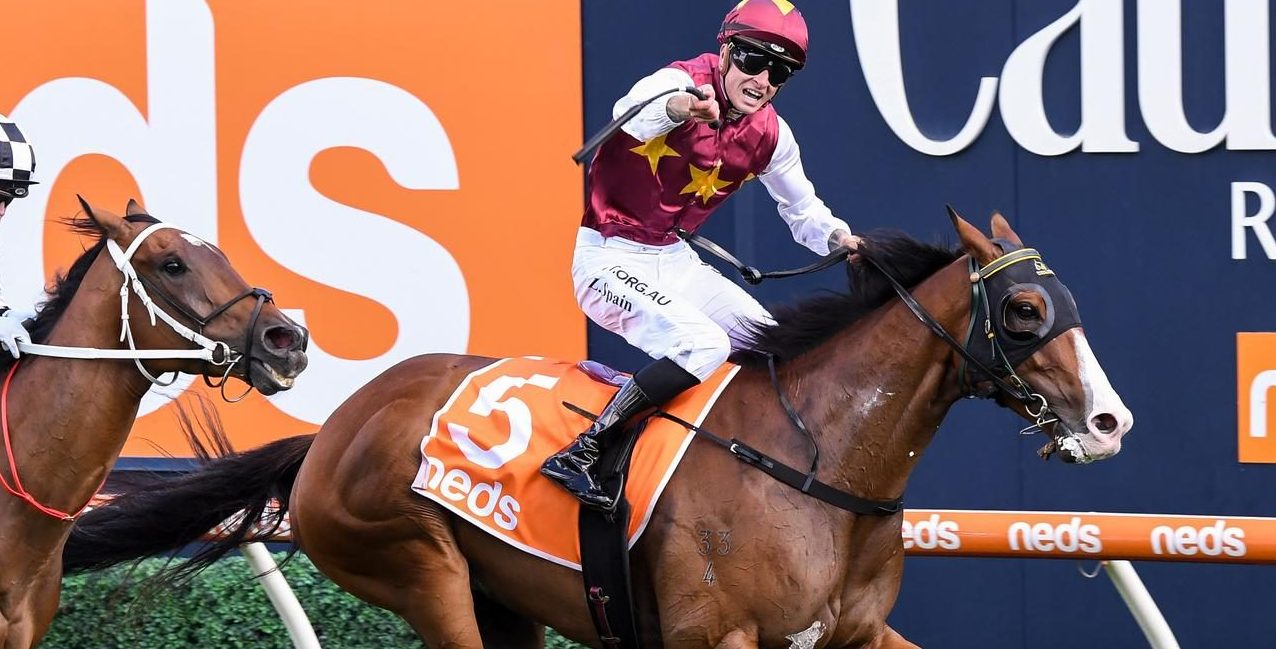 One of the biggest review days of the Autumn, with a lot of classy horses resuming. In Melbourne we saw Streets Of Avalon win his 2nd group one, continuing his affinity with the Caulfield 1400m, and in Sydney we saw a very classy colt rocket to the top of the Golden Slipper markets with a dominant display in the Inglis Millennium.

A handful of stakes races in Melbourne for all different age groups and divisions, headlined by the first group one of the year. The track played perfectly and was upgraded to a good 3 during the program.

The C.F. Orr was run at a good tempo- nothing crazy but they went at a solid clip. Streets Of Avalon was given a gun ride to let the leader go early and take over at the right time. He’s a bulldog who wouldn’t lie down when Imaging looked to have him cold at the 250m mark. With a better run in transit Imaging probably wins, but he’s had a few chances now. Crosshaven was solid but looked to lack a bit of fitness first up. He’ll head to the Australian Guineas, likely at his next start.

The obvious disappointment of the race was Sir Dragonet, who never looked likely and was beaten nearly 10L. I’m shocked they ran the horse given all week they’d set a firm deck would result in a scratching. He’s a hard horse to place now and don’t be shocked to see him miss the All Star Mile and either jump straight to the 2000m of an Australian Cup, or more likely in my opinion, head to Sydney in search of wet ground in a Queen Elizabeth.

The Blue Diamond previews might’ve asked more questions than they answered. Arcaded was impressive taking out the fillies’ edition, and General Beau clung on for the colts. The boys clearly take the wood here- they’ve run 0.97 seconds faster overall and come home much faster too. Arcaded is a nice horse but I’d be hard against her in a Blue Diamond.

The horse I definitely want to take away from the previews is Anamoe. From reports he had stacks of improvement to come from the yard, but still put in a huge run, missing by the barest of margins. He was a touch slow away and I think would be better on the outside of horses. He won very impressively 2nd up last prep and will love a fast run 1200m. He’s the clear threat to Enthaar in the big one, and I think should be closer in the market to her. Jigsaw was good after racing wide and a few others such as Marine One, Construct and Yulong Turbo will appreciate further.

The Autumn Stakes was run at a brutal tempo, which found out a lot of horses. Poland jumped out very well and got a lovely run behind the speed. The fit horses, Amish Boy and It’sourtime both ran on fairly well. A couple of the resuming stayers were completely gassed out by the speed in the race, notably Young Werther and Albarado. I’d be wary of backing them next start because they could race a bit flat. I’d expect both to run in 3 weeks’ time in the Autumn Classic over 1800m, whilst the winner heads to the Guineas. It’sourtime and I’m Thunderstruck both likely spell.

La Mexicana was too good in the Kevin Hayes, thanks to a ground saving Jamie Kah special- who is still absolutely airborne. She can keep winning in similar grade. Pinkham was solid in 3rd and perhaps heads to the Typhoon Tracy at The Valley next start- an ideal target.

Best Of Days got his absolute birthday in the Carlyon. He was backed off the map and went straight to the front, never looking in doubt. Nonconformist was a great run first up, running the race fastest last 400/200m split. He’s come back very well and heads to the Peter Young over 1800m before tackling the Australian Cup 3rd up at 2000m. He’s my top seed in that given many in the market won’t be there- no surprise to see him into $13 in the futures market and I think he’ll start single figures.

Probabeel was simply too good in the Bellamine Stakes. 60kg first up didn’t stop her- she had lengths on those mares and showed it under a sweet ride from D Lane. She runs in the Futurity next start against Behemoth and the resuming Arcadia Queen, who is down to trial on Tuesday morning, before all three progress to the All Star Mile as leading chances.

Prophet’s Thumb is an Autumn mare and was given another J Kah special to land the Rubiton. Bold Star was a huge run from the back in the day’s fastest splits. He likely heads to an Oakleigh Plate next along with 3rd placed Garner. Both would be rough hopes. Sword Of Mercy had no luck whatsoever and is flying- she’ll just win back to mares grade next start.

Anamoe– loved his run Saturday. He’ll improve heaps from that and a fast run 1200m will suit him perfectly. He’s the clear 2nd seed in the Blue Diamond and at the prices I’d rather be with him over Enthaar two weeks out.

Nonconformist- Excellent return from this talented gelding. Not all went right last prep, but he’s come back very well. Peaks 3rd up in what looks a very weak Australian Cup and will be a huge chance.

Track played well despite some showers on the day, with horses able to win from anywhere.

All eyes were on Written Beauty in race 3, a bm90 over 1000m. She trialled like a bomb and was expected to romp in as the $1.30 favourite. She won by a length, so you can’t be too harsh, but she had big wraps on her heading into the Autumn after some big wins last prep. They went very slow here, mainly because natural leader Spaceboy missed the start. Written Beauty clearly didn’t enjoy the tempo as she raced quite fiercely. She’ll be better suited in a faster race and can definitely improve and win again- it just depends if the stable take her through the 3yo fillies’ grades or step up to WFA at some point.

Another promising filly, April Rain, was too good in race 4 as the odds on favourite. She settled back and had to work but was too strong late over 1300m. She might appreciate even further now for a big filly that covers a lot of ground.

Profiteer was the highlight of the day in the Inglis Millennium. He came out fast, went straight to the lead and never looked like losing, winning by 5.3L. I don’t think he beat anything of substance, but he couldn’t have been more impressive and did it at a fast speed throughout. It’s been all but confirmed he’s staying in Sydney to target the Golden Slipper, so I’d expect his next run to either come in the Todman Stakes or Silver Slipper. He’s now the narrow Golden Slipper favourite over Enthaar who of course races in the Blue Diamond first- there’s very little between them!

Peltzer was too strong in the Eskimo Prince, keeping his perfect Randwick record intact. Apparently, he’s matured very nicely from the Spring, and although he got a perfect run here, he should only improve off that and will be suited up to a mile. He heads to the Hobartville Stakes at Rosehill before likely tackling the Randwick Guineas and possibly a Doncaster Mile if he can make the field. North Pacific was the disappointment here- some were bagging Jmac’s ride when he got tight for room coming into the straight but go back and watch the replay- the horse wasn’t going well at all and really never responded until the last 200m when he finally picked up and ran through the line. He trialled poorly leading in and perhaps is looking for further, or a wetter track, but he’s hard to back with confidence going forward. Prague was a good run when covering ground back and wide, just peaking on his run late for 3rd. He could follow the same path as Peltzer and will be competitive.

The Inglis Sprint was taken out by $26 roughie Rocketing By, who made it three wins in a row, the first coming in a Nowra class one! He was a fit, in form horse who was given a peach by Kmac to slice through the field rather than circle the field, which ultimately made the difference. Golden Rose/Caulfield Guineas winner Ole Kirk tried to do that and just had too much to do, finishing 3rd. He put in a similar run first up last prep in the Run To The Rose and still looks to be the leading 3yo in the country based off the run Saturday. He has a couple of options- he could stick to his age group and contest the Hobartville, Guineas and potentially then the Doncaster, which is the most logical. The Futurity in Melbourne at WFA would be very interesting, although he’d strike a pretty hot field. He could also run at WFA in the Canterbury Stakes over 1300m in a few weeks’ time. Dame Giselle was a pass mark first up in 4th, beaten 1.4L. I think she’s better sitting closer to she speed and stalking them, which she wasn’t able to do when forced to settle back and chase a long way out. Back to her own sex she’ll be hard to beat, likely in the Surround Stakes where she should clash with old nemesis Hungry Heart.

Shared Ambition has come back well with blinkers on first up. He got a nice run and proved too strong late. He’s probably found his mark as a group 3 horse and can step up in trip next start and be competitive. Mount Popa ran very well first up also. He’s got a spruik on him and is right on track for his grand final, although what that is hasn’t been confirmed. There’s a chance he’ll come to Melbourne and target an Australian Cup, but would need to win 2nd up, and likely will if he stays in benchmark grade.

Ole Kirk- Thought his run was as good as it could have been under the circumstances. If he stays in his age group, he’s still the #1 seed heading towards races like the Hobartville and Randwick Guineas in my opinion.

Dame Giselle- I don’t think she was suited on Saturday in the same race having to chase so far out- her best asset is the way she can travel into races and sprint quickly. She likely targets a Surround Stakes over 1400m for 3yo fillies and she’ll be hard to beat there.

Mount Popa- If he stays in benchmark grade, perhaps over a touch further, he’ll be hard to beat next start. He exploded 2nd up last prep over 2000m and could do similar.