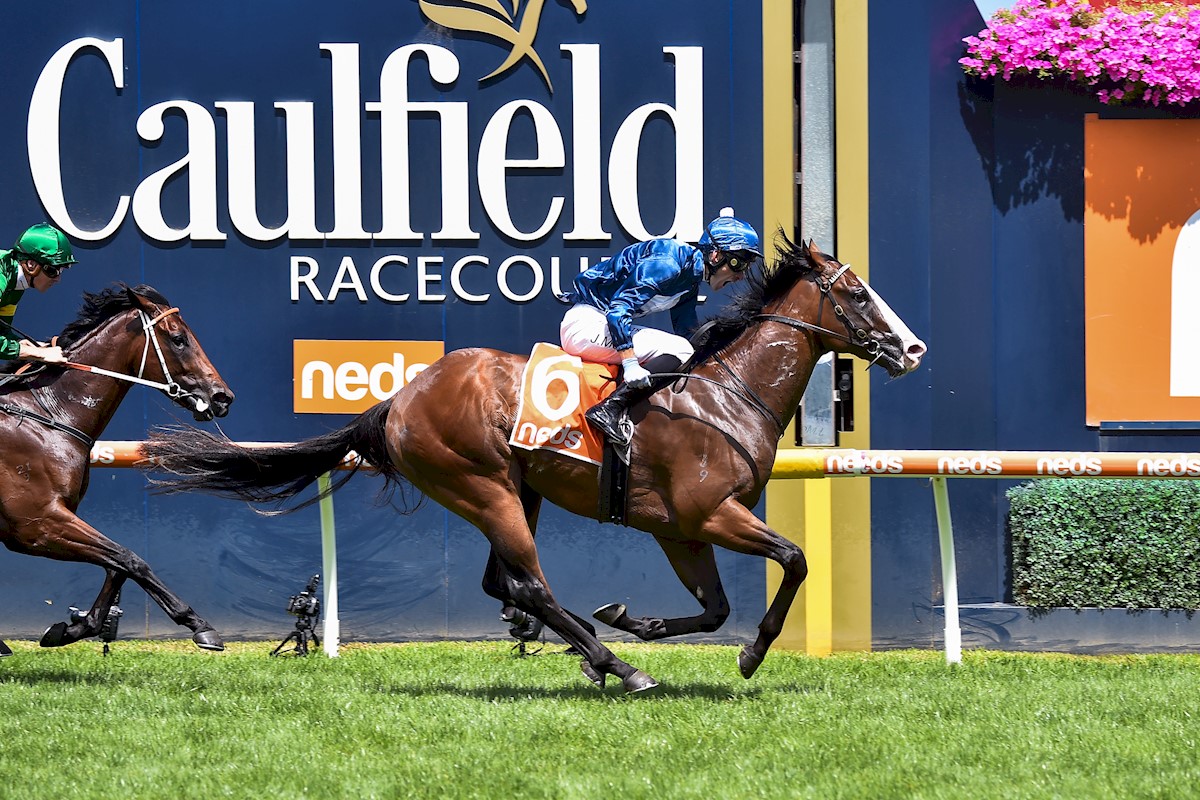 Huge day of racing at Caulfield on Saturday with the Blue Diamond Stakes headlining a nine-race card, along with the Futurity Stakes and the Oakleigh Plate.

All 10 races are at black-type level and Trent Crebbin has previewed every race on the card with his best bet coming up in the last.

The track is a good 4 and the rail is out 3 metres.

Find our race-by-race preview and tips below!

Good little kick off to Blue Diamond day. (6) Mornington Glory is always a horse I’ve had time for since his first trial before last prep. His debut win was good but he still does a bit wrong and was well beaten in the Red Anchor at $8 behind Generation before a spell. He’s jumped out and trialled super leading into this and gets a couple of good gear changes. I think he can measure up with a spell under the belt.

(5) Mars Mission is a talented horse on the up. Both wins this prep have been good and he was dominant at The Valley on speed. Interesting to note that Mcneil jumps off Generation to stick with this horse and I think he’ll sit outside the leader and control this race again.

(2) Generation was underdone first up but was given a good ride and sprinted well to score at this T/D. He probably stalks Mars Mission and will be fitter here.

(1) Finance Tycoon was solid first up when wide and does have that massive win at this T/D but all his other form is just fair.

(2) Flying Mascot is clearly the horse to beat and deserves to be short. Her first up run was very good, hitting the front with 25m to go but just run down by the now retired star mare Probabeel. She had a very good last prep and maps to get a pretty soft run trailing the leader.

(3) Kahma Lass is the one that I think should be a bit shorter. She also ran behind Probabeel first up and stuck closest to the inside around the bend which was the inferior ground (estimates of around 1-1.5L inferior). 2nd up last prep off a similar run she did a good job to run down Buffalo River at this T/D. She’s 2/2 when 2nd up and can provide some resistance.

(1) Rich Hips is a very good fresh mare (3/5 first up) and the 1400m is her best trip. She’ll be finishing strongly and looks the other main chance in the race.

This looks a great betting race and I’m keen to back three horses. (3) Castlereagh Kid is a talented stayer on the up. He went out fast in front first up and bolted in at Gosford before going to Sandown and starting $1.70, toughing out a strong win. The early splits show he went nearly 8L below class average to the 800m there which I’m convinced isn’t his go, but he just kept kicking and came away again. Blinkers on here, 3rd up, a bit more pressure, he’ll roll along and be very hard to catch.

(10) Mahrez was enormous first up at Pakenham when getting a long way out of his ground before racing wide when staying at 1400m in the Autumn Stakes last start but coming again through the line. Up to 1800m will definitely help, as will a faster run race where hopefully he settles better.

(5) Bon Vivant looks a nice stayer as well. He didn’t do much when in Melbourne but I liked how strong his last 200m was at Warwick Farm last time out, really knuckling down late. Up to 1800m willl definitely suit this horse and he maps for a decent smother midfield.

(4) Argentia was enormous first up despite all reports that she was substantially underdone. She came from last in a solidly run race and really knuckled down late to get up in a big win. She’s always shown plenty of talent and I think she’s the best filly in this race. Barrier 1 isn’t ideal but she just needs a gap to be winning this.

(10) Forbidden City annihilated her rivals first up in a weak maiden, bolting in by 8L. She’ll roll forward and potentially sit outside the leader again.

The Sydney fillies (3) Mokulua and (12) Von Trapp both made decent late ground first up over 1200m behind Fangirl and Espiona which is obviously very good form. Both will likely get a long way back but if Argentia is held up and they get the right race shape can finish well.

Siding with the map horse in (5) Callsign Mav who I thought ran well first up in the Carlyon with 60kg, sitting 2nd to Open Minded who faded to be beaten 5L. He’s got a strong 2nd up record and did win the group 1 Windsor Plate 2nd up last prep at a mile. I think 1800m is a good trip for him around Caulfield and he’ll take some running down.

(1) Cascadian is interesting. His run in the Orr first up was super when railing through into 3rd, which wasn’t the best ground. He’s never won 2nd up and jumps straight to 1800m but does have a bit of a class edge on this field. Not sure where he gets to on the map- I’m not sure he has the early speed to hold leader’s back and he’ll need to sprint off what looks a tempo controlled by the danger.

(3) Shared Ambition can improve. He was given a barrier trial in the Carlyon when the COT to be ridden quietly came through and he was restrained to settle last. His sectionals were interesting, running the fastest 1000-800m, 0.01 off the fastest 800-600m, but hitting a flat spot between the 600-400m when 6th fastest. His last 400/200m were much better and he does have a good 2nd up record, and a good record at this T/D. If they choose to he can sit 2nd and run very well.

(7) Delphi is classy and was solid in a walking tempo first up last prep before great runs in the Naturalism and Herbert Power. He might need this hit out for the Australian Cup but he’s a good horse.

Only a small field for the Futurity but it’s an interesting race. I’m siding with (3) Mo’unga. He’s got an unbelievable first up record with 3 wins from 4 starts, the only miss a 3rd in the CS Hayes as a 3yo. First up last prep he won a group 1 over Verry Elleegant before running fantastic races in the Makybe Diva, Epsom, Cox Plate and Mackinnon. If he can get on the back of Tofane I think he can run a big race here. Ignore the trials- he never trials well, didn’t have blinkers on, and the latest was on a wet track.

(4) Tofane is hard to knock. She got everything in her favour in the Orr leading just below average tempo and proving too strong. She generally improves 2nd up and she maps to land just behind the leaders from barrier 3.

(1) I’m Thunderstruck was good late in the Orr despite being quite underdone. He’ll improve nicely into this and should’ve won the Rupert Clarke at this T/D last prep. He’s probably going to be last and will be charging late, I just wonder whether 1400m at Caulfield is his go. He’ll be flying late and be right on track for 1600m at Flemington.

(2) Streets Of Avalon ran okay behind Marabi first up and obviously loves this T/D. I think he’ll be ridden to lead from Turaath and be there for a while.

For my runner by runner preview of the Blue Diamond Stakes, please follow the link:
https://www.racingbet.com.au/blue-diamond-stakes-2022-runner-by-runner-preview/

Not a full field for the Oakleigh Plate. No doubt (5) Marabi is the horse to beat. She’s unbeaten and absolutely flying. Her win at this T/D in the Christmas Stakes was very good on a fast tempo, holding off Away Game who has since run very well in the MM mare’s race. The win last start was good but the form out of it has been very questionable and she did get every favour against horses not suited at 1200m. This is a good test.

(6) Oxley Road hasn’t drawn ideally but I think he can run well. He jumped out very well leading into his first up run where he had to lump 59kg and raced on the fence which was inferior. He drops 6.5kg now and 2nd up last prep at this T/D he did run well at SWP when 3rd to Masked Crusader. I’d love for him to get the same run he did when winning the Caulfield Sprint, just behind the speed, but he’ll need a good ride early to slot in.

(1) Wild Ruler has to carry 58kg but has trialled brilliantly for this. His first up run last prep was good behind Nature Strip in very good time and he maps to sit just off them.

(7) Away Game and (4) Bella Nipotina will be ridden off speed and be charging late, while (9) Minhaaj just needs some luck to sprint from barrier 1 but will have some horses falling back in her lap.

Really looks a two horse race for mine. (5) Desert Icon was far too good over 1800m here last time out, sent straight to the front after being backed off the map and controlling the race to win comfortably. He’s up 2.5kg in weight but gets a good map again either leading or taking a sit off Ziegfeld and from there he’ll be very hard to beat. Expect him to be well backed again.

(6) Criminal Code was the best closer in that race and does meet the winner 2.5kg better. Not sure he has the gate speed to land closer from barrier 1 but will be fitter 3rd up and with luck can pose resistance.

(8) Wyclif won well in Adelaide last start but didn’t beat much and had the right run. He looks short enough at 2nd favourite.