Tim Geers and Trent Crebbin review Saturday’s racing from Eagle Farm and Sandown and list their horses to follow and sack below. 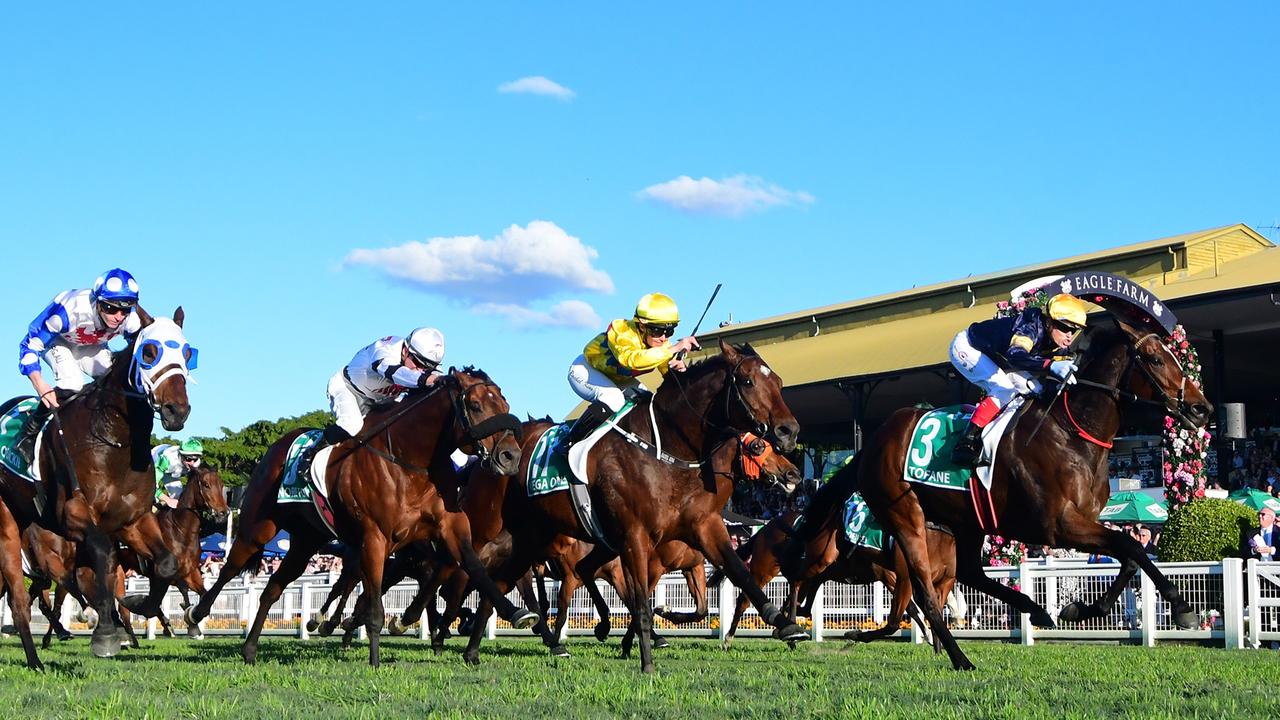 Tofane caused a minor upset in the Group 1 Stradbroke Handicap at Eagle Farm, edging out the favourite Vega One, who as brave in 2nd. It justified the connections’ decision not to send her through the sales ring last month and instead target the Stradbroke, which was her second victory at the top level. Converge proved way too good for his rivals in the Group 1 J.J. Atkins Plate, with the son of Frankel bolting up by more than 3L.

Meanwhile, Zaaki turned out another impressive performance in winning the inaugural Q22. It wasn’t quite the 7L demolition job he produced in the Doomben Cup, but James McDonald never really got him out of second gear. Tim Geers‘ best bet of the day – Ayrton – landed the 5 unit max bet with a dominant victory in the Gunsynd Classic, bouncing back from his last-start defeat.

At Sandown Hillside, it was an absolute clinic by Trent Crebbin, who posted a 27 unit profit for the meeting, including his best bet and best value bet saluting.

The boys review all the action from both meetings and provide their horses to follow and horses to sack below.

Only a few horses to follow and just one to sack this week, with many of these having raced in their respective grand finals. It was also a somewhat tricky meeting to review, with the inside once again proving to be inferior ground, meaning lots of horses can be forgiven for their performances.

Mob Buster – Started $101 and ran a bottler behind Ayrton, which obviously looks a good form reference. He’s building a nice little record and if he drops back to an easier race next start, he should be going very close to winning. The same can probably be said for Without Thinking, who beat him comfortably at the Sunshine Coast before failing in the Gunsynd.

Ayrton blitzes them in the Gunsynd Classic. pic.twitter.com/k3dmOQkDH2

Odeum – Sat wide throughout and was only run down very late by Brooklyn Hustle. The removal of all the gear seemed to do the trick, and she probably ended up in the best part of the track, but it was still an encouraging return to form.

So You Win – Didn’t have this horse in my list to follow until I saw him nominated for the Ipswich Cup this coming weekend. If he was to line up there on the quick back-up, he’d be very hard to beat. Ran well again on the weekend in a race that was run at a farcical tempo, which turned out to be a dash home the final 300m.

Lord Belvedere – I made excuses for him his past two starts, when he raced wide without cover on both occasions, but he was dreadful on the weekend with no excuses. Perhaps didn’t stay 3200m, but he’s sacked in any case.

Lord Belvedere gets life after that rubbish, absolutely putrid

Barbie’s Fox (r4)– Given the pattern of the day, her run was huge when getting a long way back and charging to the line to be beaten 1L. Clearly come back very well and at 1400m on another wet track next start, likely at Flemington, she’ll be very hard to beat.

Seb Song (r7)– Another that just got too far back and into a terrible position in running. Sarodec ran them ragged and he was basically last on the fence. Once he got off heels he let down well and wasn’t beaten all that far. Can follow on tracks with give in them, because he doesn’t let down as well on firm surfaces.

Ruban Bleu (r9)– He’s never won 1st up before so his run for 3rd behind a smart horse in Zipping Boy was excellent, another that got back and charged late. He’s generally much better 2nd/3rd up and looks to have come back well.

Dr Drill (r5)– Had his chance stalking No Effort who went out hard and was beaten a long way. Perhaps down to the heavy track but he has generally handled wet tracks in the past and he hasn’t won in a long time.

Relucent (r6)– I know he got back which made it nearly impossible but he’s gone around at $6 and been beaten 6L here. He just really struggles to win with his racing pattern and if he goes around at single figures he’s going to need everything to go his way.

Don’t want to be too harsh sacking anything that got back in the field because it was very hard to make ground on the day. A few others pulled up lame or with EIPH or may have failed on the heavy so be wary.

Zipping Boy clings on in the last at Sandown and completes a sensational day of tipping by @TrentC_Racing. 🎯